Vango: Between Sky and Earth (Hardcover) 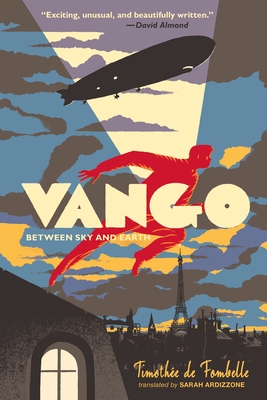 This is book number 1 in the Vango series.

A breathless adventure from international award winner Timothée de Fombelle charts a desperate search for identity across the vast expanses of Europe.

In a world between wars, a young man on the cusp of taking priestly vows is suddenly made a fugitive. Fleeing the accusations of police who blame him for a murder, as well as more sinister forces with darker intentions, Vango attempts to trace the secrets of his shrouded past and prove his innocence before all is lost. As he crisscrosses the continent via train, boat, and even the Graf Zeppelin airship, his adventures take him from Parisian rooftops to Mediterranean islands to Scottish forests. A mysterious, unforgettable, and romantic protagonist, Vango tells a thrilling story sure to captivate lovers of daring escapades and subversive heroes.

Timothée de Fombelle is a popular French playwright who has achieved international success as a novelist with his debut, Toby Alone, and its sequel,Toby and the Secrets of the Tree. He has worked as a teacher and in 1990 set up his own theater company. Timothée de Fombelle lives with his family in Paris.

Sarah Ardizzone has won several awards for her translation work, including the Marsh Award for Children’s Literature in Translation for Toby Alone by Timothée de Fombelle and for Eye of the Wolf by Daniel Pennac. She lives in London.

In this exceptional, sprawling novel, French author de Fombelle builds a layered tale around his mysterious protagonist, one full of humor and memorable characters. Part fantasy, part adventure, part historical novel, the story of Vango's flight across Europe and the smart young women that populate his life will be sure to thrill fans of Kenneth Oppel and win de Fombelle many enthusiasts of his own.
—Publishers Weekly (starred review)

Thrilling... With numerous characters and a winding and often complicated story, this breathtaking tale is guaranteed to keep teens on the edge of their seats, and will appeal to confident readers who enjoy intricately plotted tales.
—School Library Journal (starred review)

The story's got all the classic elements of swashbuckling adventure tales like The Count of Monte Cristo. ... Beautiful writing, intricate plotting, and breathless reveals—plus several plucky female leads—make this a must-read.
—Kirkus Reviews (starred review)

French author de Fombelle has written a brilliant, wonderfully exciting story of flight and pursuit, filled with colorful characters and head-scratching mystery. As the novel proceeds, the suspense is ratcheted up to breathtaking levels as the boy remains only one step ahead of his relentless pursuers. This reminds even the most jaded readers of the abiding pleasures of a compelling, page-turning story.
—Booklist (starred review)

Playwright de Fombelle is a master of the perfectly honed scene, and the action speeds by with theatrical flair and crafty sleight of hand that will be particularly appreciated by teens who relish foreign and indie films. ... This intriguing imported thriller demands a sequel.
—Bulletin of the Center for Children's Books (starred review)

Unusual and captivating.
—The Horn Book