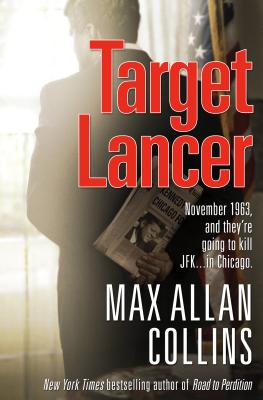 By Max Allan Collins
$25.99
Not available to order.

Long before November 22, 1963, Nathan Heller, "P.I. to the Stars," knows that a conspiracy is in the works. Several years earlier, Heller had been involved with the Kennedys, the Mob, and the CIA in the early stages of a plan to assassinate Fidel Castro. Shortly after, Heller's Mafia contact is murdered.

After being interrogated by gangsters and contacted by U.S. Attorney General Robert Kennedy, Heller realizes that he may be the one person who can prevent a devastating political assassination. Only he knows all the players; only he knows why a web of conspirators has targeted the man known to the Secret Service as "Lancer," John Fitzgerald Kennedy.
Rigorously researched, Max Allan Collins's Target Lancer is far more truth than fiction.

MAX ALLAN COLLINS has been chosen as the 2017 Grand Master by Mystery Writers of America (MWA). He is the bestselling author of the graphic novel Road to Perdition, the basis for the hit film starring Tom Hanks. He has won two Shamus Awards for previous Nathan Heller novels. His recent Heller mysteries include Ask Not and Bye Bye, Baby. He lives in Muscatine, Iowa.

“A whirlwind tour of the story surrounding Marilyn Monroe’s untimely demise as it might have been covered in the garish pages of Confidential magazine, or by TMZ for that matter, with more grit than George Baxt’s Hollywood mysteries.”  —Library Journal

“Collins convincingly portrays the real-life players in the drama, who include Jimmy Hoffa and Frank Sinatra. Readers with a taste for hard-boiled roman à clef will hope that more Heller is in the offing.”
—Publishers Weekly

“A Hollywood novel that’s more interesting than the true story—if, in fact, it’s not what really happened anyway. Collins’s twist on the American mystery simply can’t be put down.”  —RT Book Reviews

"Max Allan Collins can lay claim to being the master of true-crime fiction…a seamless juxtaposition of narrative cunning and historical cross-referencing."  —Chicago Magazine