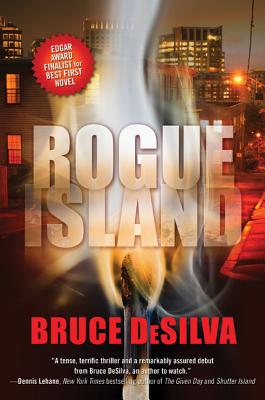 This is book number 1 in the Liam Mulligan series.

Liam Mulligan is as old school as a newspaper man gets. His beat is Providence, Rhode Island, and he knows every street and alley. He knows the priests and prostitutes, the cops and street thugs. He knows the mobsters and politicians—who are pretty much one and the same.

Someone is systematically burning down the neighborhood Mulligan grew up in, people he knows and loves are perishing in the flames, and the public is on the verge of panic. With the whole city of Providence on his back, Mulligan must weed through a wildly colorful array of characters to find the truth.

“A tense, terrific thriller and a remarkably assured debut from Bruce DeSilva, an author to watch.” —Dennis Lehane, New York Times bestselling author of The Given Day and Shutter Island

“Writing with genuine authority, a dose of cynical humor, and a squinting eye on the world, Bruce DeSilva delivers a newspaper story that ranks with the best of them.” —Michael Connelly, New York Times bestselling author of the Harry Bosch novels

“With Rogue Island, Bruce DeSilva accomplishes something remarkable: He takes everything we love about the classic hard-boiled detective novel and turns it into a story that's fresh, contemporary, yet timeless. By turns gripping, funny, and touching, it's a tale filled with characters so vivid they jump off the page.” —Joseph Finder, New York Times bestselling author of Paranoia

“Not since Dennis Lehane's A Drink Before the War have I read a first novel as compelling and sure-handed as Rogue Island. Investigative reporter Liam Mulligan has the gritty, tough-talking charm, the old-school street smarts, and sexy chivalry of a Marlowe or Spade.” —James W. Hall, Edgar Award–winning author of Hell's Bay

“The tight description, deft pacing, and coming-alive-off-the-page characters will have me standing in line for the next one.” —Tim Dorsey, New York Times bestselling author of the Serge Storms mysteries

“Imagine Don Winslow peppered with Peter Dexter and you'd have the flavor and pace of this novel. The writing has a balanced poise that is perfectly suited to the narrative. There are no tidy solutions, and the ending leaves a fierce chill lingering. A terrific slow-motion burn of a novel.” —Ken Bruen, critically acclaimed Irish master of noir

“When it comes to fresh noir-on-wry, readers could not ask for more--except for the author to hurry up with Mulligan's next adventure in detection.” —Otto Penzler, dean of America's crime novel editors and owner of New York City's famous The Mysterious Bookshop

“A stunning debut. Authentic, hilarious, and compelling. I've read hundreds of crime books, but this one bleeds the truth.” —Ace Atkins, critically acclaimed author of Devil's Garden and Infamous

“A debut novel as witty as it is intelligent, smoothly written, and wryly told, a gem.” —Thomas H. Cook, Edgar Award–winning author of Red Leaves

“Rogue Island is a stunning debut, and DeSilva is a writer to watch.” —Alafair Burke, author of 212