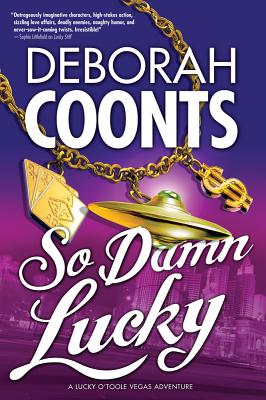 By Deborah Coonts
$24.99
Backordered. Place an order and we will let you know when to expect your book.

Lucky O'Toole Head of Customer Relations at The Babylon, premier mega-resort on the Vegas Strip thinks it's just another night in Las Vegas. But then a magician pulls a disappearing act, right under Lucky's nose. Is it a stunt? Or something worse?

While Lucky chases leads, someone is trying to put her off the scent. As if this wasn't enough to ruin her day, Lucky's relationship with The Big Boss is coming to a head past hurts can no longer be denied. Of course, she is already on shaky emotional ground: Teddie, her live-in, has been touring with a young and lovely pop star. Paxton Dane, former coworker and would-be suitor, is still circling, hoping to find a chink in the armor of Lucky's resolve. And then, there's this French chef, who is proving to be too hot to handle .

DEBORAH COONTS has built her own business, practiced law, flown airplanes, written a humor column for a national magazine, and survived a teenager. "So Damn Lucky" is her third novel.

"Lucky’s latest lark brims with the over-the-top ridiculousness that I love about Vegas. Fans of the series will fall in love all over again, and new readers will look forward to her next escapade."--Publishers Weekly on So Damn Lucky "Lucky's the kind of gal who will make any heart beat faster."--Kirkus Reviews on So Damn Lucky “Las Vegas is the perfect setting for this witty tale of misdirection and larger-than-life characters. Fans of J. A . Konrath’s Jack Daniels series will love this.”
—Library Journal, starred review on Lucky Stiff

“Coonts covers Sin City territory with a dash of CSI and Janet Evanovich in her second glitzy, lighthearted novel.”
—Publishers Weekly on Lucky Stiff “Deliciously raunchy, with humorous takes on sexual proclivities, Vegas glitz and love, though Agatha Christie is probably spinning in her grave.”
—Kirkus Reviews on Wanna Get Lucky? “This is chick-lit gone wild and sexy, lightly wrapped in mystery and tied up with a brilliantly flashing neon bow.... Wanna Get Lucky? hits the proverbial jackpot.”
—Booklist “Funny, fast-paced, exuberant and brilliantly realized.”
—Susan Wiggs, New York Times bestselling author, on Wanna Get Lucky?