Last Call for the Living (Hardcover) 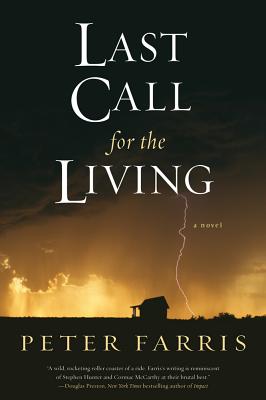 By Peter Farris
$24.99
Backordered. Place an order and we will let you know when to expect your book.

Hicklin's first mistake was double-crossing his partners in the Aryan Brotherhood. His second mistake was taking a hostage. But he and Charlie can only hide out for so long in the mountains of north Georgia before the sins of Hicklin's past catch up to them.

Hot on Hicklin's trail are a pair of ruthless Brotherhood soldiers, ready to burn a path of murder and mayhem to get their revenge. GBI Special Agent Sallie Crews and Sheriff Tommy Lang catch the case, themselves no strangers to the evil men are capable of. Soon Crews is making some dangerous connections while for the hard-drinking, despondent Lang, rescuing Charlie Colquitt might be the key to personal salvation.

Prodigious talent Peter Farris has written a backwoods fairy tale of fate and flight that is also a dark, modern thriller. Like the bastard child of Stephen Hunter's "Dirty White Boys" and Cormac McCarthy's "No Country for Old Men," "Last Call for the Living" is a smashing debut from a writer whose unique and disturbing vision of the world cannot be ignored.

PETER FARRIS is a graduate of Yale University. He lives in Cobb County, Georgia. "Last Call for the Living" is his first published novel.""

“A wild, rocketing roller-coaster of a ride. Farris’s writing is reminiscent of Stephen Hunter and Cormac McCarthy at their brutal best.”

“With Last Call for the Living, Peter Farris sticks a shotgun in your face, cracks you a beer, works you over with a meat tenderizer, insults your mama, punches your junk, and otherwise gives you the wildest Southern vacation you've ever had. Farris has just announced himself as a major new talent in crime fiction, and he ain't telling us politely.”

“Last Call for the Living left blisters on my eyelids and teeth marks on my soul. Combining razor sharp prose, a tight plot and characters I could relate to, the narrative tension bites down and doesn't let go.”

“This novel comes at you like an abusive parent, succors you like a mother, smacks you down like a bully, then helps you back up to see the light like a blood brother—but one cranked on meth, steeped in whiskey, and gunned-up for a final showdown. Last Call for the Living is a debut novel with true regret in its heart, and a poignant sadness at the implacability of fate. It is probably the most ballistic family values story you'll ever read.”

“Sam Peckinpah meets Flannery O'Connor in Peter Farris's astonishingly good debut. The veracity of violence, the beauty of brutality, and the majesty of the marginalized all align like malignant stars in this disturbing, literate, and authentic novel. Last Call for the Living is the manifesto of a talent who deserves your attention.”