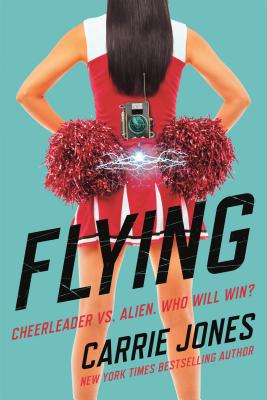 By Carrie Jones
Unavailable. Orders will be auto-cancelled.

People have always treated seventeen-year-old Mana as someone in need of protection. She's used to being coddled, being an only child, but it's hard to imagine anything could ever happen in her small-town, normal life. As her mother's babying gets more stifling than ever, she's looking forward to cheering at the big game and getting out of the house for a while.

First, the hot guy she's been crushing on at school randomly flips out and starts spitting acid during the game. Then they get into a knockdown, drag-out fight in the locker room, during which Mana finds herself leaping around like a kangaroo on steroids. As a flyer on the cheerleading squad, she's always been a good jumper, but this is a bit much. By the time she gets home and finds her house trashed and an alien in the garage, Mana starts to wonder if her mother had her reasons for being overprotective.

It turns out, Mana's frumpy, timid mom is actually an alien hunter, and now she's missing--taking a piece of technology with her that everyone wants their hands on, both human and alien. Now her supposed partner, a guy that Mana has never met or heard of (and who seems way too young and way too arrogant to be hunting aliens), has shown up, ordering Mana to come with him. Now, on her own for the first time, Mana will have to find a way to save her mother--and maybe the world--and hope she's up to the challenge.

CARRIE JONES is the New York Times and internationally bestselling author of the Need series, as well as After Obsession with Steven E. Wedel. She is a distinguished alum of Vermont College's MFA Program, and a part-time police dispatcher in Maine because she likes cop stories. Really. She blogs about her dogs, cops, and a bit about writing, too.

“Jones easily wins readers to Zara's side, portraying her as a funny, globally conscious teen who also 'collect[s] fears like other people collect stamps' (obscure phobias serve as chapter titles). Genre fans will enjoy the sizzle between Nick and Zara as well as the paranormal cast.” —Publishers Weekly on Need

“Carrie Jones's terrific fantasy/romance/thriller is sure to be a crowd pleaser. This is a taut, satisfying thriller.” —School Library Journal on Need