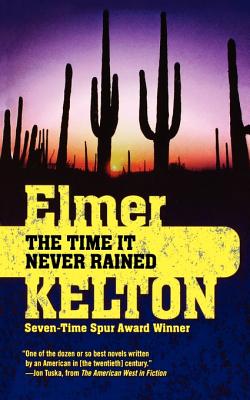 "The Time It Never Rained was inspired by actual events, when the longest and most severe drought in living memory pressed ranchers and farmers to the outer limits of courage and endurance."—Elmer Kelton

Rio Seco was too small to afford a professional manager for its one-room Chamber of Commerce.

And Rio Seco, meaning "dry river" in Spanish, symbolizes the biggest enemy of the ranchers and farmers in 1950s Texas, an enemy they can't control: drought. To cranky Charlie Flagg, an honest, decent rancher, the drought of the early 1950s is a battle that he must fight on his own grounds. Refusing the questionable "assistance" of federal aid programs and their bureaucratic regulations, Charlie and his family struggle to make the ranch survive until the time it rains again—if it ever rains again.

Charlie Flagg, among the strongest of Elmer Kelton's memorable creations, is no pasteboard hero. He is courageous and self-sufficient but as real as his harsh and unforgiving West Texas home country. His battle with an unfathomable foe is the stuff of epics and legends.

“Elmer Kelton does not write Westerns. He writes fine novels set in the West. Here a reader meets flesh-and-blood people of an earlier time, in a story that will grab and hold you from the first to the last page.” —Dee Brown, author of Bury My Heart at Wounded Knee on The Time It Never Rained

“The Time It Never Rained is not just one of the best novels ever written by a Texan. It is one of the treasures of American literature...” —John Erickson, author of The Devil in Texas and the "Hank the Cowdog" series

“...one of the dozen or so best novels written by an American in this century.” —Jon Tuska, editor of The American West in Fiction on The Time It Never Rained