Through Fiery Trials: A Novel in the Safehold Series (Mass Market) 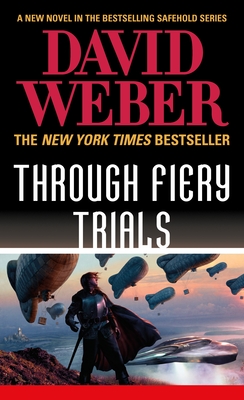 This is book number 10 in the Safehold series.

With new alliances forged and old regimes fractured, Merlin—the cybernetic avatar of Earth's last survivor and immortal beacon to humanity—and the colonies of Safehold have many adventures ahead in Through Fiery Trials, the continuation of David Weber's New York Times bestselling military science fiction series

Those on the side of progressing humanity through advanced technology have finally triumphed over their oppressors. The unholy war between the small but mighty island realm of Charis and the radical, luddite Church of God's Awaiting has come to an end.

However, even though a provisional veil of peace has fallen over human colonies, the quiet will not last. For Safehold is a broken world, and as international alliances shift and Charis charges on with its precarious mission of global industrialization, the shifting plates of the new world order are bound to clash.

Yet, an uncertain future isn't the only danger Safehold faces. Long-thought buried secrets and prophetic promises come to light, proving time is a merciless warden who never forgets.

Safehold Series
1. Off Armageddon Reef
2. By Schism Rent Asunder
3. By Heresies Distressed
4. A Mighty Fortress
5. How Firm A Foundation
6. Midst Toil and Tribulation
7. Like A Mighty Army
8. Hell's Foundations Quiver
9. At the Sign of Triumph
10. Through Fiery Trials

"A nice blend of historical combat and survival fiction....Very satisfying.... Safehold is in store for some interesting times in the coming years." —SFRevu on At the Sign of Triumph

“Vast, complex, intricate, subtle, and unlaydownable. This looks like the start of the biggest thing in science fiction since Isaac Asimov's Foundation series.” —Dave Duncan on the Safehold series

"A complex and fascinating epic about change, identity, and the nature of faith." —Publishers Weekly on Like a Mighty Army

"A superb cast of characters and plenty of action... This fine book gives new luster to Weber's reputation and new pleasure to his fans." —Booklist (starred review) on By Schism Rent Asunder

"Weber brings the political maneuvering, past and future technologies, and vigorous protagonists together for a cohesive, engrossing whole." —Publishers Weekly (starred review) on Off Armageddon Reef

"Effortlessly exceeds the magnificence of its predecessor...I cannot emphasize how much I want to read the next chapter in the Safehold saga." —Fantasy Book Critic on By Schism Rent Asunder