A Gathering of Shadows: A Novel (Shades of Magic #2) (Hardcover) 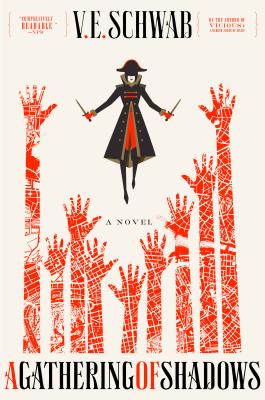 This is book number 2 in the Shades of Magic series.

"Addictive and immersive, A Gathering of Shadows cements this series as a must-read." —Entertainment Weekly, grade A

Four months have passed since the shadow stone fell into Kell's possession. Four months since his path crossed with Delilah Bard. Four months since Rhy was wounded and the Dane twins fell, and the stone was cast with Holland's dying body through the rift, and into Black London.

In many ways, things have almost returned to normal, though Rhy is more sober, and Kell is now plagued by his guilt. Restless, and having given up smuggling, Kell is visited by dreams of ominous magical events, waking only to think of Lila, who disappeared from the docks like she always meant to do. As Red London finalizes preparations for the Element Games-an extravagant international competition of magic, meant to entertain and keep healthy the ties between neighboring countries-a certain pirate ship draws closer, carrying old friends back into port.

But while Red London is caught up in the pageantry and thrills of the Games, another London is coming back to life, and those who were thought to be forever gone have returned. After all, a shadow that was gone in the night reappears in the morning, and so it seems Black London has risen again-and so to keep magic's balance, another London must fall...in V.E. Schwab's A Gathering of Shadows.

"A Darker Shade of Magic has all the hallmarks of a classic work of fantasy. Schwab has given us a gem of a tale...This is a book to treasure."—Deborah Harkeness, New York Times bestselling author of the All Souls trilogy

"Rich details illuminate every dimension of an extravagant city flooded with magic, and intriguing personalities evolve into complex characters...between [the characters those] the vivid setting, and the climactic cliffhanger, Schwab already has us anticipating the rest of the series." —Entertainment Weekly, Grade A, on A Gathering of Shadows

"Compulsively readable…her characters make the book. Just as Kell has layers, Lila is a satisfyingly rich invention…the stakes feel higher because Schwab takes the time to make a world worth getting lost in. Darker Shade Of Magicresolves its plot thoroughly, but still feels like it could be the seed of a lengthy series. With so many worlds on the map, there's plenty left to discover." —NPR on A Darker Shade of Magic

"Schwab is a fantastic writer, and this book moves along quickly: it’s an easy world to immerse oneself in, and the four Londons that we get to visit are a treat to behold: they’re vibrant, interesting and detailed. The worldbuilding here is spectacular, and it’s worth picking up the book for this alone. (Well, and the fantastic cover.)The series is set to be adapted into a television series, and both books will be perfect for that." —io9 on A Gathering of Shadows

"This is how fantasy should be done.” —Publishers Weekly, starred review, on A Gathering of Shadows

"Full of magic, intrigue, adventure, deception, a bit of piracy...this will engage both adult and young adult fantasy readers alike.” —Booklist on A Gathering of Shadows