The Bands of Mourning: A Mistborn Novel (The Mistborn Saga #6) (Hardcover) 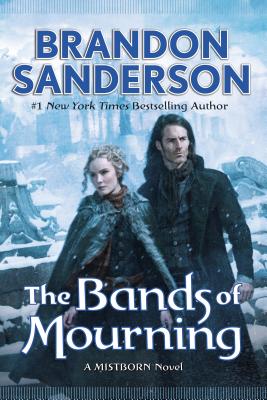 This is book number 6 in the The Mistborn Saga series.

The Bands of Mourning are the mythical metal minds owned by the Lord Ruler, said to grant anyone who wears them the powers that the Lord Ruler had at his command. Hardly anyone thinks they really exist. A kandra researcher has returned to Elendel with images that seem to depict the Bands, as well as writings in a language that no one can read. Waxillium Ladrian is recruited to travel south to the city of New Seran to investigate. Along the way he discovers hints that point to the true goals of his uncle Edwarn and the shadowy organization known as The Set.

“Sanderson is an evil genius. There is simply no other way to describe what he's managed to pull off in this transcendent final volume of his Mistborn trilogy.” —RT Book Reviews (Gold Medal, Top Pick!) on The Hero of Ages

“It's rare for a fiction writer to have much understanding of how leadership works and how love really takes root in the human heart. Sanderson is astonishingly wise.” —Orson Scott Card

“Sanderson is crafting an extremely well-thought out saga with Mistborn, one that looks to stand above the pack of his literary peers. The magic system is perfectly detailed, the world, though not completely revealed, has a great sense of natural logic to it, and the characters are a reflection of both.” —SFFWorld

“Highly recommended to anyone hungry for a good read.” —Robin Hobb on Mistborn