A Darker Shade of Magic Collector's Edition: A Novel (Shades of Magic #1) (Hardcover) 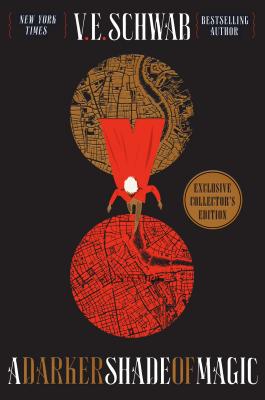 This is book number 1 in the Shades of Magic series.

With a revamped, metallic ink detailed cover and reading ribbon, this edition will also feature the following bonus material:
*End papers featuring fan art
*A glossary of Arnesian and Antari terms
*An interview between author and editor
*Original (never before seen!) tales from within the Shades of Magic world

"A Darker Shade of Magic has all the hallmarks of a classic work of fantasy...a gem of a tale. This is a book to treasure." —Deborah Harkness, New York Times bestselling author of the All Souls trilogy

Kell is one of the last Antari—magicians with a rare, coveted ability to travel between parallel Londons; Red, Grey, White, and, once upon a time, Black.

Kell was raised in Arnes—Red London—and officially serves the Maresh Empire as an ambassador, traveling between the frequent bloody regime changes in White London and the court of George III in the dullest of Londons, the one without any magic left to see.

Unofficially, Kell is a smuggler, servicing people willing to pay for even the smallest glimpses of a world they'll never see. It's a defiant hobby with dangerous consequences, which Kell is now seeing firsthand.

After an exchange goes awry, Kell escapes to Grey London and runs into Delilah Bard, a cut-purse with lofty aspirations. She first robs him, then saves him from a deadly enemy, and finally forces Kell to spirit her to another world for a proper adventure.

Now perilous magic is afoot, and treachery lurks at every turn. To save all of the worlds, they'll first need to stay alive.

“A Darker Shade of Magic has all the hallmarks of a classic work of fantasy. Its plot is gripping. Its characters are memorable. Its setting in four parallel, powerful Londons is otherworldly yet believable. Schwab has given us a gem of a tale that is original in its premise and compelling in its execution. This is a book to treasure.” —Deborah Harkness, New York Times bestselling author of The All Souls Trilogy

“Compulsively readable...her characters make the book. Just as Kell has layers, Lila is a satisfyingly rich invention...With so many worlds on the map, there's plenty left to discover.” —NPR

“A Darker Shade of Magic feels like a priceless object, brought from another, better world of fantasy books.” —io9

“A Darker Shade of Magic is smart, funny and sexy ... Schwab keeps the excitement coming with roller-coaster plot twists that establish her as, perhaps, the natural successor to Diana Wynne Jones's contemporary fantasy crown.” —The Independent