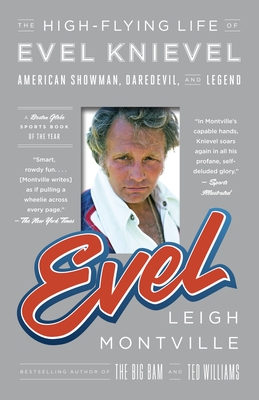 By Leigh Montville
$17.95
Backordered. Place an order and we will let you know when to expect your book.

“Evel Knievel was an American institution and a living legend for decades, but the reality of the flashy daredevil’s life was a disturbing pileup of fear, crime, crushed bones, gasoline, and Wild Turkey. In his academic yet accessible biography, Leigh Montville transcends value judgements to examine the paradox that flew high above the imagination of a generation, as often being blasted to smithereens as emerging from the wreckage.”

Evel Knievel, the father of extreme sports, was a high-flying daredevil. He was the personification of excitement and danger and showmanship, and represented a unique slice of American culture and patriotism. But behind the flash and the frenzy, who was this man in red, white, and blue?

With characteristic flair and insight, Leigh Montville delves into Knievel’s amazing place in pop culture, as well as his notorious dark side, exploring Knievel’s complicated and often contradictory relationships with his image, the media, his own family, and his many demons. With this all-American saga, Montville has delivered another definitive biography of a one-of-a-kind sports legend.

Three-time New York Times bestselling author Leigh Montville is a former columnist at the Boston Globe and former senior writer at Sports Illustrated. He is the author of The Mysterious Montague, The Big Bam, Ted Williams, At the Altar of Speed, Manute, and Why Not Us? He lives in Boston.

“[Evel] goes beyond the action-figure image, painting Knievel in all his contradictions. . . . In Montville’s capable hands, Knievel soars again in all his profane, self-deluded glory.”
—Sports Illustrated

“In the late 1960s and early 1970s . . . the coolest man on earth was Evel Knievel. . . . Montville brings him vividly back in an outlandishly entertaining new biography.”
—New York Post

“Engrossing. . . . A wild ride on the back of Knievel’s cycle.”
—Los Angeles Times

“If Knievel lived ‘as if his pants were on fire,’ then his biographer writes like a house on fire. . . . In describing the complex, contradictory stuntman’s battles with the demons that would ultimately destroy him, [Montville] pulls out all the stops.”
—The Free Lance-Star (Fredericksburg)

“The best biographies not only tell you what people did, they capture their personalities as well, making readers feel as if they are sitting down at a long, well-lubricated dinner with the subject. Mark Twain: A Life by Ron Powers is one such bio, and another is Leigh Montville's brilliant recent biography of Evel Knievel: Evel.”
—Jim Caple, ESPN.com

“Fresh and exciting. . . . A fast-paced thrill ride through a life of success, sex and excess that is sure to leave you winded.”
—The Montana Standard

“Montville has been doing big time things with his clever writing mind and his flying keyboard fingers for decades. . . . The job he did on [Evel] tops the others, good as they are. The outrageousness of his subject and Montville's matchless ability to entertain and report make it so.”
—Hartford Courant

“Greatly entertaining. . . . A biography as sensationalist and superior as the daredevil himself.”
—Kirkus Reviews