My Life from Scratch: A Sweet Journey of Starting Over, One Cake at a Time (Paperback) 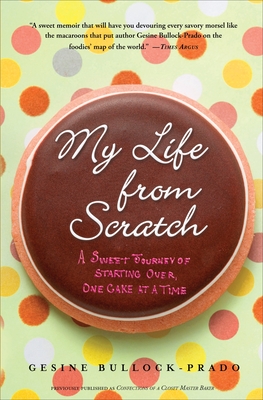 A former Hollywood insider trades the Hollywood Hills for Green Acres—and lives to tell about it in this hilarious, poignant treat of a memoir.

As head of her celebrity sister’s production company, Gesine Bullock-Prado had a closet full of designer clothes and the ear of all the influential studio heads, but she was miserable. The only solace she found was in her secret hobby: baking. With every sugary, buttery confection to emerge from her oven, Gesine took one step away from her glittery, empty existence—and one step closer to her true destiny. Before long, she and her husband left the trappings of their Hollywood lifestyle behind, ending up in Vermont, where they started the gem known as Gesine Confectionary. And they never looked back. Confections of a Closet Master Baker follows Gesine's journey from sugar-obsessed child to miserable, awkward Hollywood insider to reluctant master baker. Chock-full of eccentric characters, beautifully detailed descriptions of her baking process, ceaselessly funny renditions of Hollywood nonsense, and recipes, the ingredients of her story will appeal to anyone who has ever considered leaving the life they know and completely starting over.

GESINE BULLOCK-PRADO’s delicious confections have been featured on the Food Network's hottest new show, Road Tasted with the Neelys and in such publications as In Style, People, Vermont Life, and Boston Common. Gesine still lives in Vermont and is preparing to open another bakery in Austin, Texas.