The Expats: A Novel (Paperback) 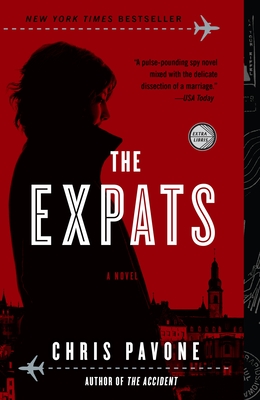 Can we ever escape our secrets?

In the cobblestoned streets of Luxembourg, Kate Moore's days are filled with playdates and coffee mornings, her weekends spent in Paris and skiing in the Alps. But Kate is also guarding a tremendous, life-defining secret—one that's become so unbearable that it begins to unravel her newly established expat life. She suspects that another American couple are not who they claim to be; her husband is acting suspiciously; and as she travels around Europe, she finds herself looking over her shoulder, increasingly terrified that her own past is catching up with her. As Kate begins to dig, to uncover the secrets of the people around her, she finds herself buried in layers of deceit so thick they threaten her family, her marriage, and her life.
Stylish and sophisticated, fiercely intelligent, and expertly crafted, The Expats proves Chris Pavone to be a writer of tremendous talent.

Now with Extra Libris material, including a reader’s guide and bonus content

CHRIS PAVONE is a New York Times bestselling author and winner of the Edgar Award.  He was a book editor for nearly two decades and lives in New York City with his family. Pavone's second novel, The Accident is coming out in Spring 2014.

“Sly. . . . Pavone strengthens this book with a string of head-spinning revelations in its last pages. . . . The tireless scheming of all four principals truly exceeds all sane expectations.” —The New York Times

“Expertly and intricately plotted, with a story spiraling into disaster and a satisfyingly huge amount of double-crossing, The Expats certainly doesn’t feel like a first novel.  This is an impressively assured entry to the thriller scene.” —The Guardian (UK)

“Pavone plunges around with a plot-load of surprises...and he moves smoothly between the mundane and the melodramatic...The spinning of the plot is ingenious.” —The Washington Times

“Riveting.  One of the most accomplished debuts of recent years: not just a worthy addition to the literature of espionage and betrayal, but a fine portrait of a marriage disintegrating under the pressure of secrets and lies.” —John Connolly