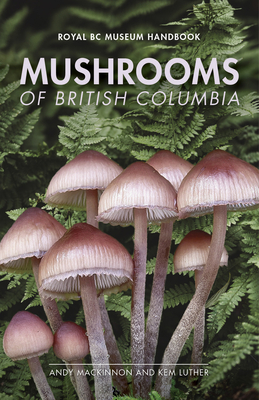 With more species of fungi than any other region in Canada, British Columbia is a rich playground for mushroom hunters. Now there’s Mushrooms of British Columbia, the newest handbook from the Royal BC Museum. It’s perfect for anyone wanting to know more about BC mushrooms—whether for study, harvest, photography or appreciation.

This is the go-to guidebook for anyone, amateur or expert, who loves to study, draw, photograph and eat BC mushrooms.

Andy MacKinnon is a forest ecologist and the co-author of six best-selling books about plants of western North America, including Plants of Coastal British Columbia. For several decades he has co-taught university undergraduate forest ecology field courses in Bamfield and Tofino and Haida Gwaii. He’s an adjunct professor at Simon Fraser University and a retired Professional Forester and Professional Biologist. Andy completed his MSc in mycology in 1982 and was awarded an honorary Doctor of Science degree by SFU in 2013. He’s past president of the South Vancouver Island Mycological Society. Kem Luther is the former dean of Sheridan College’s joint program in communication, culture, and information technology at the University of Toronto. He grew up in the Nebraska Sandhills, studied at Cornell, the University of Chicago (PhD), York University, and the University of Toronto (MSc), and has been on the faculties of several Ontario universities and colleges. Since the 1990s he has focused on writing interpretive articles and books. He has lived in Metchosin, British Columbia, since 2005.

"The new Mushrooms of British Columbia is a very welcome and useful addition to our understanding of the world of nature. . . This book will expand the pleasure and knowledge of anyone who spends time in nature." —Robert Bateman, Wildlife artist

"A first in my lifetime--a guide to the mushrooms of BC! A long time coming, but so worth the wait. Mushrooms of BC is a glorious book!" —Britt Bunyard, Publisher and editor-in-chief, FUNGI Magazine

"For amateurs and professionals, Mushrooms of British Columbia will be the go-to book for safe and accurate mushroom identification . . . I enthusiastically recommend this gorgeous field guide, which is clearly the best book for sojourns into the forests of BC." —Paul Stamets, Author of Mycelium Running: How Mushrooms Can Help Save the World

"Mushrooms of British Columbia [is] the must-have book for mushroom enthusiasts and those eager to broaden their knowledge of nature in British Columbia and the northwestern United States." —westcoastforager.com

"This is a book that should be on the shelf, and in the daypack, of every naturalist in BC!" —Lasqueti Island Nature Conservancy

"More than 350 of our most common species are made easily identifiable . . . it's a lively and engaging read. . . .This volume on BC's myriad of mushrooms is definitely a keeper."—Cherie Thiessen

"Completely satisfying on every level. The text is clear and concise and informative without being overwhelming. . . . Detailed species descriptions and diagnostic photos provide plenty of scientific information for the serious fungi enthusiast.
With over ten mushroom books already on my shelf, I hesitated as to whether I needed yet another guide book for fungi, but as soon as I saw MacKinnon & Luther’s Mushrooms of British Columbia I realized this was a must-have. Though there are many excellent field guides to fungi, Mushrooms of BC focuses on the most likely encountered species in our province. This is no small task, as there are over 3000 species of macrofungi (mushrooms that can be seen without a microscope) in BC. With the help of many experts, the authors chose 350 species to profile in this guide, with mention of 850 species." —Jocie Brooks, BC Review