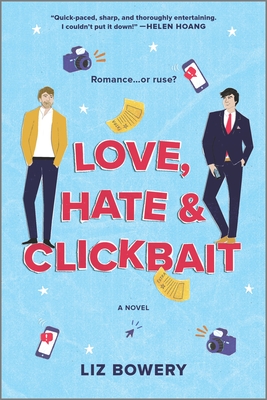 "Quick-paced, sharp, and thoroughly entertaining. I couldn't put it down "--Helen Hoang

Shake some hands. Kiss some coworkers.

Cutthroat political consultant Thom Morgan is thriving, working on the governor of California's presidential campaign. If only he didn't have to deal with Clay Parker, the infuriatingly smug data analyst who gets under Thom's skin like it's his job. In the midst of one of their heated and very public arguments, a journalist snaps a photo, but the image makes it look like they're kissing. As if that weren't already worst-nightmare territory, the photo goes viral--and in a bid to secure the liberal vote, the governor asks them to lean into it. Hard.

Thom knows all about damage control--he practically invented it. Ever the professional, he'll grin and bear this challenge as he does all others. But as the loyal staffers push the boundaries of "giving the people what they want," the animosity between them blooms into something deeper and far more dangerous: desire. Soon their fake relationship is hurtling toward something very real, which could derail the campaign and cost them both their jobs...and their hearts.