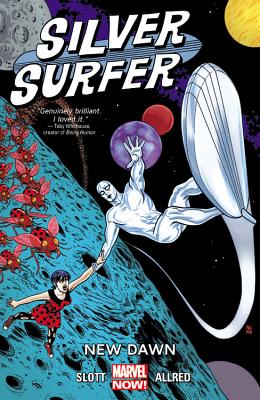 By Dan Slott (Text by), Michael Allred (Illustrator)
$17.99
Email or call for price.

The universe is big. Bigger than you could ever imagine. And the Silver Surfer, lone sentinel of the skyways, is about to discover that the best way to see it...is with someone else. Meet Dawn Greenwood, the Earth girl who's challenged the Surfer to go beyond the boundaries of the known universe - into the strange, the new, and the utterly fantastic! Who is the Never Queen? How is the universe's future tied into her very existence? And why is she trying to destroy the Surfer? And when the Surfer tries to return Dawn home, he gets swept into a strange battle against Shuma-Gorath alongside Dr. Strange, the Hulk and more! The problem is, to stop Shuma-Gorath, Dawn will have to pay the price...with her life.

Dan Slott is an American comic book writer best known for his work on books such as The Amazing Spider-Man, Arkham Asylum: Living Hell, She-Hulk, and the twice monthly The Superior Spider-Man.

Michael Dalton "Mike" Allred is an Americancomic book artist and writer most famous for his indie comics creation, Madman. His style is often compared to pop art, as well as commercial and comic art of the 1950s and 1960s.