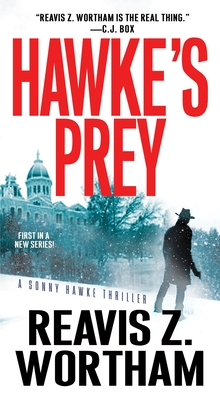 This is book number 1 in the A Sonny Hawke Thriller series.

It’s a stunning attack, lightning quick and chilling in its execution. A merciless gang of terrorists seizes the Presidio County Courthouse in the midst of the worst blizzard West Texas has seen in a century. Loaded down with enough fire power to outfit an army, the attackers slaughter dozens, take all survivors hostage, and assume complete control. The nation—and the U.S. government—are at their mercy.

Or so they think. They don’t know that a seasoned Texas Ranger is also inside the courthouse. Sonny Hawke has hauled in some of America’s Most Wanted. Now he’s up against his most dangerous adversary yet. Sonny likes his chances. The enemy is his to take down—one by one. Until he’s face-to-face with the ruthless mastermind gunning for our very freedom . . .

Praise for Reavis Z. Wortham and His Novels

“The most riveting thriller all year!” —John Gilstrap

Reavis Z. Wortham is the award-winning author of the Red River Mystery series, including Unraveled, The Right Side of Wrong, Vengeance is Mine, Dark Places, Burrows, and The Rock Hole (winner of the Benjamin Franklin Award). He is a member of the Mystery Writers of America, the Writers’ League of Texas, the International Association of Crime Writers, and International Thriller Writers. Reavis also pens a weekly self-syndicated weekly outdoor column for numerous Texas newspapers, writing on everything from fishing to deer hunting. He lives in northeast Texas with his wife. Please visit him on Facebook or at his website, reaviszwortham.com.