A World of Hurt (A Wilkie John Western #1) (Mass Market) 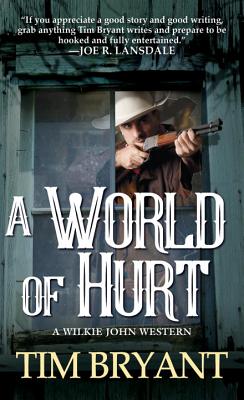 This is book number 1 in the A Wilkie John Western series.

“If you appreciate a good story and good writing, grab anything Tim Bryant writes and prepare to be hooked and fully entertained.”
—Joe R. Lansdale

In Texas, every man has his price.

For a young man of seventeen, Wilkie John Liquorish has lived one sorry life. From his ill-fated stint in the U.S. Army to a back-breaking job as a gravedigger, Wilkie just can’t seem to catch a break. His latest gig—working a cattle drive from Mobeetie, Texas, to Fort Worth—is no exception. The food-poisoning death of a chuckwagon cook has everyone spooked, and the fear spreads like a disease. Wilkie barely makes it out alive. But when he shows up in Fort Worth, he has another kind of death waiting for him—in the unlikely form of Gentleman Jack Delaney . . .

A fancily-dressed bounty hunter from New Orleans, Gentleman Jack is ready to nail and hang young Wilkie as soon he arrives in town. He claims the boy is the most wanted outlaw in Texas. If Wilkie can manage to outsmart, outrun, or outgun this not-so-gentle man, he just might go down in history. Or swing from a tree. Or both . . .

THERE ARE A MILLION WAYS TO DIE IN THE OLD WEST.
THIS IS ONE OF THEM.

Tim Bryant was born in Smackover, Arkansas. He graduated from Stephen F. Austin State University in 2007 with a BFA in creative writing. Before that, he was a singer-songwriter and recording artist, performing in his native Texas as well as his second home, New Orleans, and recording with musicians from Ireland, England, Norway, and all over the United States. He continues to write, record and perform music, and is a proud parent of two children.  Readers can visit him at timbryantbooks.com.