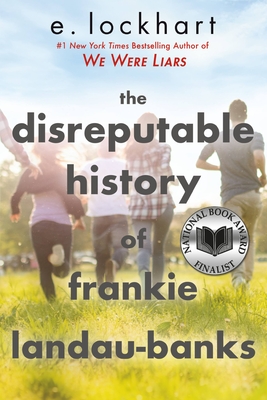 "During
Frankie’s sophomore year at boarding school, she learns that her new boyfriend
belongs to an ancient all-male society, The Loyal Order of the Basset Hounds.
Disgruntled by their unapologetically gender-based code of secrecy, Frankie
determines to infiltrate their ranks. But, gentle readers, be warned: Ms.
Landau-Banks’s subsequent actions at her very reputable school result in
a series of elaborate pranks that, while brilliant in their ingenious social
commentary and witty play on tradition, are, without a doubt, entirely disreputable."

The hilarious and razor-sharp story of how one girl went from geek to patriarchy-smashing criminal mastermind in two short years, from the #1 New York Times bestselling author of We Were Liars and Genuine Fraud.

Frankie Landau-Banks at age 15:
A knockout figure.
A sharp tongue.
A chip on her shoulder.
And a gorgeous new senior boyfriend: the supremely goofy, word-obsessed Matthew Livingston.

No longer the kind of girl to take "no" for an answer.
Especially when "no" means she's excluded from her boyfriend's all-male secret society.
Not when she knows she's smarter than any of them.
When she knows Matthew's lying to her.
And when there are so many pranks to be done.

This is the story of how she got that way.

E. Lockhart is the #1 New York Times bestselling author of We Were Liars and Genuine Fraud. Her other books include Fly on the Wall, Dramarama, The Disreputable History of Frankie Landau-Banks, and the Ruby Oliver Quartet: The Boyfriend List, The Boy Book, The Treasure Map of Boys, and Real Live Boyfriends. Emily lives in Brooklyn, New York. Visit her online at EmilyLockhart.com and follow @elockhart on Twitter.

A homage to girl-power, the novel offers biting social commentary throughout - not the kind that deadens a story but the kind that gives it punch - and a protagonist who is independent and fearless...—New York Times