The Amulet of Samarkand (A Bartimaeus Novel #1) (Paperback) 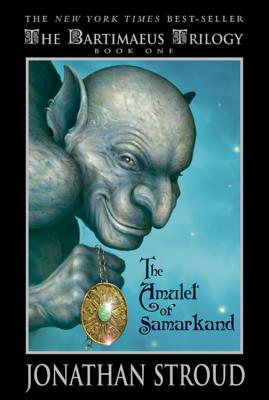 This is book number 1 in the A Bartimaeus Novel series.

"When he summoned an ancient djinni to help wreak revenge on a cruel older magician, Nathaniel was not entirely prepared for the sly, wise-cracking (and wildly entertaining) mischief-maker he got in Bartimaeus or the deep corruption and dark secrets lurking within the magicians' ruling elite...secrets that pull Nathaniel and Bartimaeus in deeper with each book in this outstanding trilogy."

Nathaniel is a young magician's apprentice, taking his first lessons in the arts of magic. But when a devious hotshot wizard named Simon Lovelace ruthlessly humiliates Nathaniel in front of everyone he knows, Nathaniel decides to kick up his education a few notches and show Lovelace who's boss. With revenge on his mind, he masters one of the toughest spells of all: summoning the all-powerful djinni, Bartimaeus. But summoning Bartimaeus and controlling him are two different things entirely, and when Nathaniel sends the djinni out to steal the powerful Amulet of Samarkand, Nathaniel finds himself caught up in a whirlwind of magical espionage, murder, blackmail, and revolt.

Set in a modern-day London spiced with magicians and mayhem, this extraordinary, funny, pitch-perfect thriller will dazzle the myriad fans of Artemis Fowl and the His Dark Materials trilogy. And with the rights sold in more than a dozen countries, and a major motion picture in the works, the Bartimaeus trilogy is on the fast track to becoming a classic.

Jonathan Stroud (www.jonathanstroud.com) is the author of four previous books in the Lockwood & Co. series as well as the New York Times bestselling Bartimaeus books, and the stand-alone titles Heroes of the Valley, The Leap, The Last Siege, and Buried Fire. He lives in England with his wife and three children.