Ira Resnick: A Decade through My Lens (Hardcover) 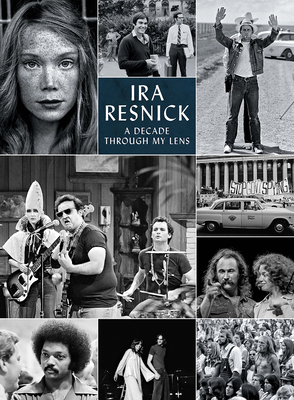 This finely printed and bound volume is an expanded, more personal version of Ira Resnick’s critically acclaimed photo book The Seventies: A Photographic Journey, featuring twice as many celebrity photos and anecdotes.

In images and words, Resnick re-creates his path through a decade of tremendous change, in the world and in himself—from film school at NYU, through travels in Israel and Canada, to the cultural ferment of Mill Valley and the glamour of Hollywood. Along the way, Resnick’s work as a professional photographer brought him in contact with the leading personalities of his time:

Musicians like the Rolling Stones, Stevie Nicks, and James Taylor

Resnick’s photographs of these iconic figures—many never seen since their original publication in magazines like Rolling Stone, People, and Us—will fascinate anyone with an interest in popular culture. And his personal journey will resonate with anyone who came of age in the 1970s.

Ira M. Resnick studied film at New York University before beginning a decade-long career as a professional photographer. A leading collector of movie posters, Resnick later founded the Motion Picture Arts Gallery, the first gallery devoted exclusively to the art of the movies, and authored the book Starstruck: Vintage Movie Posters from Classic Hollywood (Abbeville). Resnick is a trustee of the Film Society of Lincoln Center and served as chairman of the board from 1999 to 2005.