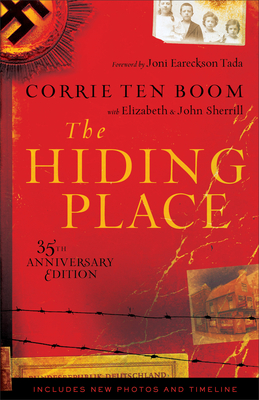 "Every experience God gives us . . . is the perfect preparation for the future only He can see."--Corrie ten Boom

Corrie ten Boom was a Dutch watchmaker who became a heroine of the Resistance, a survivor of Hitler's concentration camps, and one of the most remarkable evangelists of the twentieth century. In World War II she and her family risked their lives to help Jews and underground workers escape from the Nazis, and for their work they were tested in the infamous Nazi death camps. Only Corrie among her family survived to tell the story of how faith ultimately triumphs over evil.

Here is the riveting account of how Corrie and her family were able to save many of God's chosen people. For 35 years millions have seen that there is no pit so deep that God's love is not deeper still. Now The Hiding Place, repackaged for a new generation of readers, continues to declare that God's love will overcome, heal, and restore.

"A groundbreaking book that shines a clear light on one of the darkest moments of history."--Philip Yancey, author, The Jesus I Never Knew

"Ten Boom's classic is even more relevant to the present hour than at the time of its writing. We . . . need to be inspired afresh by the courage manifested by her family."--Jack W. Hayford, president, International Foursquare Church; chancellor, The King's College and Seminary

"The Hiding Place is a classic that begs revisiting. Corrie ten Boom lived the deeper life with God. Her gripping story of love in action will challenge and inspire you "--Joyce Meyer, best-selling author and Bible teacher.

Corrie ten Boom (1892-1983) was born in Haarlem, The Netherlands. After being arrested in 1944 for helping Jews escape the Nazi regime, Corrie spent the last year of World War II in various prison camps. After the war, she was invited to share her experiences in over sixty countries and was honored by the state of Israel for her work during the war. Her life story, The Hiding Place, was originally released in 1971. In 1977, she settled in California, where she remained until her death in 1983, on her 91st birthday.John and Elizabeth Sherrill have authored or coauthored numerous best sellers with sales in excess of 50 million, including The Hiding Place, The Cross and the Switchblade, and God's Smuggler.