Monster: The Autobiography of an L.A. Gang Member (Paperback) 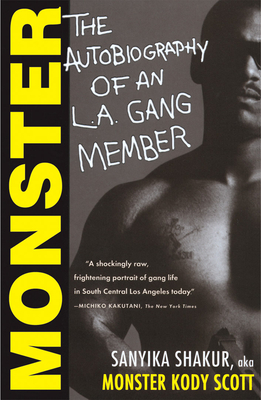 Written in solitary confinement, Kody Scott's memoir of sixteen years as a gangbanger in Los Angeles was a searing best-seller and became a classic, published in ten languages, with more than 300,000 copies in print in the United States alone. After pumping eight blasts from a sawed-off shotgun at a group of rival gang members, twelve-year-old Kody Scott was initiated into the L.A. gang the Crips. He quickly matured into one of the most formidable Crip combat soldiers, earning the name -Monster- for committing acts of brutality and violence that repulsed even his fellow gang members. When the inevitable jail term confined him to a maximum-security cell, a complete political and personal transformation followed: from Monster to Sanyika Shakur, black nationalist, member of the New Afrikan Independence Movement, and crusader against the causes of gangsterism. In a document that has been compared to The Autobiography of Malcolm X and Eldridge Cleaver's Soul on Ice, Shakur makes palpable the despair and decay of America's inner cities and gives eloquent voice to one aspect of the black ghetto experience today.

I propose to open my mind as wide as possible to allow my readers the first ever glimpse at South Central from my side of the gun, street, fence, and wall.” Monster Kody Scott

Monster is unquestionably one of the most disturbingly authentic triumphs of the human spirit ever executed in print.” Los Angeles Times