The Finance Curse: How Global Finance Is Making Us All Poorer (Paperback) 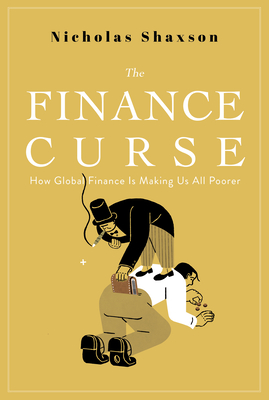 By Nicholas Shaxson
$17.00
On Our Shelves Now

Financial journalist Nicholas Shaxson first made his reputation studying the "resource curse," seeing first-hand the disastrous economic and societal effects of the discovery of oil in Angola. He then gained prominence as an expert on tax havens, revealing the dark corners of that world long before the scandals of the Panama and Paradise Papers. Now, in The Finance Curse, revised with chapters exclusive to this American edition, he takes us on a terrifying journey through the world economy, exposing tax havens, monopolists, megabanks, private equity firms, Eurobond traders, lobbyists, and a menagerie of scoundrels quietly financializing our entire society, hurting both business and individuals.

Shaxson shows we got here, telling the story of how finance re-engineered the global economic order in the last half-century, with the aim not of creating wealth but extracting it from the underlying economy. Under the twin gospels of "national competitiveness" and "shareholder value," megabanks and financialized corporations have provoked a race to the bottom between states to provide the most subsidized environment for big business, have encouraged a brain drain into finance, and have fostered instability, inequality, and turned a blind eye to the spoils of organized crime. From Ireland to Iowa, Shaxson shows the insidious effects of financialization on our politics and on communities who were promised paradise but got poverty wages instead.

We need a strong financial system--but when it grows too big it becomes a monster. The Finance Curse is the explosive story of how finance got a stranglehold on society, and reveals how we might release ourselves from its grasp.

Nicholas Shaxson is the author of Treasure Islands: Tax Havens and the Men who Stole the World and Poisoned Wells: The Dirty Politics of African Oil. He is a journalist, campaigner, and world expert on both tax havens and financial centers, as well as the Resource Curse. His writing has appeared in Vanity Fair, Financial Times, the Economist, the Economist Intelligence Unit, and many others. He lives in Germany.