If Walls Could Speak: My Life in Architecture (Hardcover) 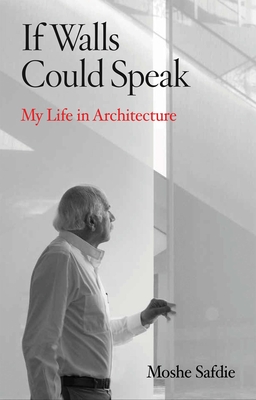 One of the world's greatest and most thoughtful architects recounts his extraordinary career and the iconic structures he has built--from Habitat in Montreal to Marina Bay Sands in Singapore--and offers a manifesto for the role architecture should play in societyOver more than five decades, legendary architect Moshe Safdie has built some of the world's most influential and memorable structures--from the 1967 modular housing scheme in Montreal known as "Habitat" and the Yad Vashem memorial in Israel, to the Crystal Bridges Museum in Arkansas and the Marina Bay Sands development and extraordinary Jewel Changi airport interior garden and waterfall in Singapore. For Safdie, the way a space functions is fundamental; he is deeply committed to architecture as a social force for good, believing that any challenge, including extreme population density and environmental distress, can be addressed with solutions that enhance community and uplift the human spirit. Safdie always refers to the "silent client" an architect must ultimately serve: the people who live in, work in, or experience a building.If Walls Could Speak takes readers behind the veil of an essential yet mysterious profession to explain through Safdie's own experiences how an architect thinks and works--"from the spark of imagination through the design process, the model-making, the politics, the engineering, the materials." Relating memorable stories about what has inspired him--from childhoods in Israel and Montreal to the projects and personalities worldwide that have captured his imagination--Safdie reveals the complex interplay that underpins every project and his vision for the role architecture can and should play in society at large. Illustrated throughout with drawings, sketches, photographs, and documents from his firm's voluminous archives that illuminate his stories, If Walls Could Speak ends with a chapter outlining seven projects Safdie would pursue around the world if resources and will were no issue and the choices were his to make.A book like no other, If Walls Could Speak will forever change the way you look at and appreciate any built structure.

MOSHE SAFDIE is acclaimed as one of the greatest and most innovative architects of the past half century. In 2019 he was awarded the prestigious Wolf Prize--considered along with the Nobel Prize as one of the most important prizes bestowed on an individual--for having "a career motivated by the social concerns of architecture and formal experimentation."