Shylock Is My Name: William Shakespeare's The Merchant of Venice Retold: A Novel (Hogarth Shakespeare) (Paperback) 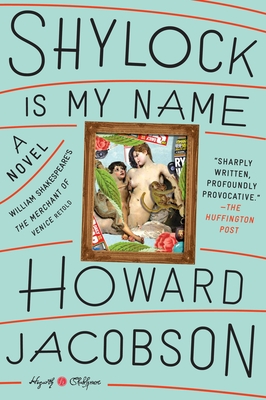 By Howard Jacobson
$15.00
Backordered. Place an order and we will let you know when to expect your book.

“My Name is Shylock, Howard Jacobson’s reimagining of The Merchant of Venice for the 21st century, is the second installment of the Hogarth Shakespeare series, in which many of today’s greatest writers will put their own spin on Shakespeare’s plays. The series launched last fall, with The Gap of Time, Jeannette Winterson’s take on The Taming of the Shrew. I’m not too far in to My Name is Shylock so far, but already, the ever-satirical Jacobson has peppered the text with risque jokes, introduced the theory that Shakespeare was originally a Shapiro, and summed up his entire style of writing in this quote attributed to Beaumarchais: ‘I hasten to laugh at everything for fear I might be obliged to weep at it.'”

Man Booker Prize-winner Howard Jacobson brings his singular brilliance to this modern re-imagining of one of Shakespeare’s most unforgettable characters: Shylock

Winter, a cemetery, Shylock. In this provocative and profound interpretation of The Merchant of Venice, Shylock is juxtaposed against his present-day counterpart in the character of art dealer and conflicted father Simon Strulovitch.  With characteristic irony, Jacobson presents Shylock as a man of incisive wit and passion, concerned still with questions of identity, parenthood, anti-Semitism and revenge.

While Strulovich struggles to reconcile himself to his daughter Beatrice's “betrayal” of her family and heritage—as she is carried away by the excitement of Manchester high society, and into the arms of a footballer notorious for giving a Nazi salute on the field—Shylock alternates grief for his beloved wife with rage against his own daughter's rejection of her Jewish upbringing. Culminating in a shocking twist on Shylock’s demand for the infamous pound of flesh, Jacobson’s insightful retelling examines contemporary, acutely relevant questions of Jewish identity while maintaining a poignant sympathy for its characters and a genuine spiritual kinship with its antecedent—a drama which Jacobson himself considers to be “the most troubling of Shakespeare’s plays for anyone, but, for an English novelist who happens to be Jewish, also the most challenging.”

HOWARD JACOBSON has written fourteen novels and five works of non-fiction. In 2010 he won the Man Booker Prize for The Finkler Question and was also shortlisted for the prize in 2014 for his most recent novel, J. Howard Jacobson’s first book, Shakespeare’s Magnanimity, written with the scholar Wilbur Sanders, was a study of four Shakespearean heroes. Now he has returned to the Bard with a contemporary interpretation of The Merchant of Venice.

International Praise for Shylock Is My Name:

“[An] ebullient riff on Shakespeare... [a] blend of purposeful deja vu and Jewish fatalism…Jacobson’s highflying wit is more Stoppardian than Shakespearean, even amid rom-com subplots and phallocentric jests equally well suited to Elizabethan drama as to the world of Judd Apatow.”
-- The New York Times Book Review

“Jacobson… has delivered with authority and style… [a] deft artist firmly in control, offering witty twists to a play long experienced by many as a racial tragedy.”
-– The Washington Post

"The Shylock of the novel is ... a character in search of an author, or at least an author who will write him fully, fill in the blanks and give him a voice where once he was voiceless. And in Jacobson, after just over 400 years, he has found a mensch who has done—with considerable skill—exactly that."
-- The Daily Beast

“Stimulating… Jacobson is ideally suited to take on ‘Merchant.’”
-- The Milwaukee Journal Sentinel

“It is delicious…Jacobson is one of our finest writers.”
-- Forward

“Supremely stylish, probing and unsettling…This Shylock is a sympathetic character... both savagely funny and intellectually searching, both wise and sophistical, intimate and coldly controlling… Jacobson's writing is virtuoso. He is a master of shifting tones, from the satirical to the serious. His prose has the sort of elastic precision you only get from a writer who is truly in command.”
-- The Independent (UK)

“Jacobson, with glorious chutzpah, gives Shylock his Act V, and the end when it comes is extremely satisfying… Provocative, caustic and bold.”
–- Financial Times (UK)

"Jacobson is a novelist of ideas... What is added to a great work in the rewriting? Do we need the argot of the 21st century because the original is now intimidatingly remote? [Shylock Is My Name] is a moving, disturbing and compelling riposte to the blithe resolution offered in the urtext."
-- Sydney Morning Herald (Australia)

“Jacobson treats Shylock less as a product of Shakespeare’s culture and imagination than as a real historical figure emblematic of Jewish experience—an approach that gives the novel peculiar vigour.”
– Prospect Magazine (UK)

“When Shylock and Strulovitch are swapping jokes, stories, and fears, the tale is energetic…a work that stands on its own.”
– Publishers Weekly

“The Merchant is well-suited to Jacobson, a Philip Roth–like British writer known for his sterling prose and Jewish themes….full of the facile asides and riffs for which Jacobson has been praised.” -- Kirkus