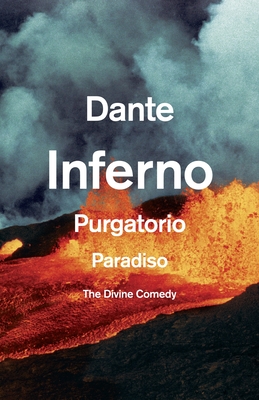 The complete Divine Comedy (Inferno, Purgatorio, Paradiso) in one volume from Vintage Classics. The greatest poem of the Middle Ages, in the standard Carlyle-Okey-Wickstead translation, with full notes.

Dante’s Divine Comedy relates the allegorical tale of the poet’s journey through the three realms of the dead. Accompanied through the Inferno and Purgatory by Virgil—author of the Roman epic the Aeniad—Dante encounters mythical, historical, and contemporaneous figures in their respective afterlives. Relying on classical (pagan) mythology and Christian imagery and theology, Dante imagines diverse vivid and inventive punishments for the various sinners he encounters, which have become part of the Western imagination.

Upon their approach to Paradise, which as a pagan, no matter how worthy, the Latin poet cannot enter, Virgil relinquishes his role as guide to Beatrice. Dante's chaste beloved then accompanies him along the ascent, as they encounter the blessed and the holy, and Dante arrives at a vision of the heavenly paradise.

Dante Alighieri, born in Florence, Italy, c. 1265, is considered one of the world's greatest poets. His use of the Florentine dialect established it as the basis for modern Italian. His late medieval epic, The Divine Comedy, was above all inspired, as was all his poetry, by his unrequited love for Beatrice, a woman he may have seen only from afar. He died in 1321, having completed his great work, yet an exile from his native city.

“Exactly what we have waited for these years, a Dante with clarity, eloquence, terror, and profoundly moving depths.” –Robert Fagles, Princeton University

“A marvel of fidelity to the original, of sobriety, and truly, of inspired poetry.” –Henri Peyre, Yale University