The Terror Years: From al-Qaeda to the Islamic State (Paperback) 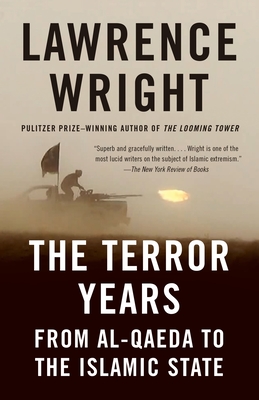 These powerful investigative pieces, which take us from the religious police of Saudi Arabia to the rise of the Islamic State, comprise an essential primer on jihadist movements in the Middle East—and the attempts of the West to contain them. In these pages, Lawrence Wright examines al-Qaeda as it experiences a rebellion from within and spins off a growing web of worldwide terror. He shows us the Syrian film industry before the civil war—compliant at the edges but already exuding a barely masked fury. He gives us the heart-wrenching story of American children kidnapped by ISIS—and Atlantic publisher David Bradley’s efforts to secure their release. And he details the roles of key FBI figures John O’Neill and his talented protégé Ali Soufan in fighting terrorism. In a moving epilogue, Wright shares his predictions for the future. Rigorous, clear-eyed, and compassionate, The Terror Years illuminates the complex human players on all sides of a devastating conflict.

Lawrence Wright is a staff writer for The New Yorker and the author of eight previous books of nonfiction, including In the New World, Remembering Satan, The Looming Tower, Going Clear, and Thirteen Days in September, and one novel, God’s Favorite. His books have received many prizes and honors, including a Pulitzer Prize for The Looming Tower. He is also a playwright and screenwriter. He and his wife are longtime residents of Austin, Texas.

“Superb and gracefully written. . . . Wright is one of the most lucid writers on the subject of Islamic extremism.” —The New York Review of Books

“An essential record of the 9/11 era. . . . Wright has a gift only the most talented journalists possess . . . he brings the world vividly to our fingertips.” —O, The Oprah Magazine

“This is reportage pure and simple—and it is first-rate.” —The Wall Street Journal

“Compelling. . . . Insightful. . . . Wright takes readers on a disquieting journey through the world of violent jihadism, spending time with its perpetrators, its theorists, its mavericks, its victims, and its enemies. . . . Wright’s portrait of the spiritual home of contemporary jihadism will be as chilling as it is credible.” —Foreign Affairs

“Masterful. . . . Searing. . . . Combines a deep knowledge base with a strong current of journalistic compassion.” —The Dallas Morning News

“Offers a view of the war through the lens of the individuals and societies that have taken part in it. . . . explores events through a closer, more personal lens at which historians too often balk, in an engaging, empathetic, and literary narrative style.” —Commonweal

“Insightful, informative. . . . Vivid. . . . Through [Wright’s] eyes, readers can understand that the fight against terror, from al-Qaida to the Islamic State, involves real people, not slogans.” —St. Louis Post-Dispatch

“Few journalists are as conversant with the frightening post-9/11 world than the New Yorker's Lawrence Wright. . . . Anyone who reflects on these thorough, thoughtful pieces will be better equipped to evaluate the prescriptions for waging that fight offered by those vying to lead it.” —Shelf Awareness