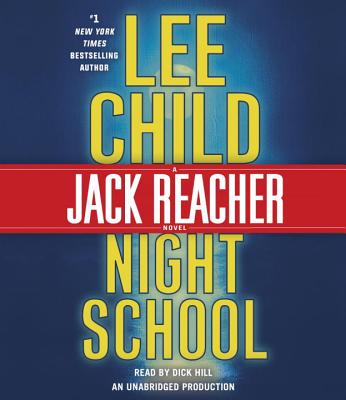 By Lee Child, Dick Hill (Read by)
Unavailable. Orders will be auto-cancelled.

This is book number 21 in the Jack Reacher Novels series.

“OK, I'll just admit it up front - I love Jack Reacher! He's big, he's bad, and he's smart. Child always finds a new situation that pits Jack against tricky villains who just might, this time, get the best of him. Night School takes place before 9/11, when Jack is still in the Army. He is sent to a 'school' with an FBI and CIA agent to figure out what a terrorist organization is trying to buy for $100 million. With plot twists and turns that keep readers guessing until the last pages, thrillers don't get any better than this. Always gripping, page-turning, and fun, Jack Reacher novels are awesome!”
— Wendy Blake (W), Country Bookshelf, Bozeman, MT

#1 NEW YORK TIMES BESTSELLER - The incomparable hero of Jack Reacher: Never Go Back takes readers to school in his most explosive novel yet. After eleven straight global #1 bestsellers, discover the thrillers that The New York Times calls "utterly addictive." It's 1996, and Reacher is still in the army. In the morning they give him a medal, and in the afternoon they send him back to school. That night he's off the grid. Out of sight, out of mind. Two other men are in the classroom--an FBI agent and a CIA analyst. Each is a first-rate operator, each is fresh off a big win, and each is wondering what the hell they are doing there. Then they find out: A Jihadist sleeper cell in Hamburg, Germany, has received an unexpected visitor--a Saudi courier, seeking safe haven while waiting to rendezvous with persons unknown. A CIA asset, undercover inside the cell, has overheard the courier whisper a chilling message: "The American wants a hundred million dollars." For what? And who from? Reacher and his two new friends are told to find the American. Reacher recruits the best soldier he has ever worked with: Sergeant Frances Neagley. Their mission heats up in more ways than one, while always keeping their eyes on the prize: If they don't get their man, the world will suffer an epic act of terrorism. From Langley to Hamburg, Jalalabad to Kiev, Night School moves like a bullet through a treacherous landscape of double crosses, faked identities, and new and terrible enemies, as Reacher maneuvers inside the game and outside the law. Praise for Night School "The prose is crisp and clean, and the fighting is realistic. . . . This latest installment has all the classic ingredients: a great setting (Hamburg), a good villain, and a mystery that draws you in efficiently, escalates unpredictably, and has a satisfying resolution."--The New Yorker

"Another timely tour de force . . . The taut thriller is textbook Lee] Child: fast-paced and topical with a 'ripped from the headlines' feel."--Minneapolis Star-Tribune "As gripping as ever."--The Florida Times-Union Praise for #1 bestselling author Lee Child and his Jack Reacher series "Reacher is] one of this century's most original, tantalizing pop-fiction heroes."--The Washington Post

Lee Child is the author of twenty New York Times bestselling Jack Reacher thrillers, eleven of which have reached the #1 position. All have been optioned for major motion pictures--including Jack Reacher (based on One Shot) and Jack Reacher: Never Go Back. Foreign rights in the Reacher series have sold in one hundred territories. A native of England and a former television director, Lee Child lives in New York City. From the Hardcover edition.