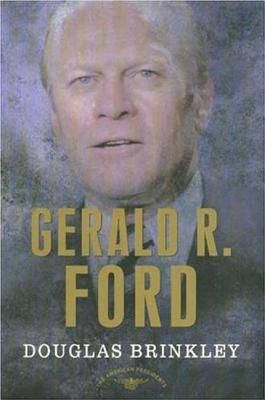 When Gerald R. Ford entered the White House in August 1974, he inherited a presidency tarnished by the Watergate scandal, the economy was in a recession, the Vietnam War was drawing to a close, and he had taken office without having been elected. Most observers gave him little chance of success, especially after he pardoned Richard Nixon just a month into his presidency, an action that outraged many Americans, but which Ford thought was necessary to move the nation forward.
Many people today think of Ford as a man who stumbled a lot--clumsy on his feet and in politics--but acclaimed historian Douglas Brinkley shows him to be a man of independent thought and conscience, who never allowed party loyalty to prevail over his sense of right and wrong. As a young congressman, he stood up to the isolationists in the Republican leadership, promoting a vigorous role for America in the world. Later, as House minority leader and as president, he challenged the right wing of his party, refusing to bend to their vision of confrontation with the Communist world. And after the fall of Saigon, Ford also overruled his advisers by allowing Vietnamese refugees to enter the United States, arguing that to do so was the humane thing to do.
Brinkley draws on exclusive interviews with Ford and on previously unpublished documents (including a remarkable correspondence between Ford and Nixon stretching over four decades), fashioning a masterful reassessment of Gerald R. Ford's presidency and his underappreciated legacy to the nation.

Douglas G. Brinkley is the director of the Theodore Roosevelt Center for American Civilization and Professor of History at Tulane University. He authored the New York Times bestsellers: Tour of Duty: John Kerry and the Vietnam War and Voices of Valor: D-Day; June 6, 1944. He is the official historian for NBC News. Dr. Brinkley is contributing editor for the Los Angeles Times Book Review and American Heritage and a contributor to the New York Times and The New Yorker.

Arthur M. Schlesinger, Jr., (1917-2007) was the preeminent political historian of our time. For more than half a century, he was a cornerstone figure in the intellectual life of the nation and a fixture on the political scene. He won two Pulitzer prizes for The Age of Jackson (1946) and A Thousand Days (1966), and in 1988 received the National Humanities Medal. He published the first volume of his autobiography, A Life in the Twentieth Century, in 2000.