Red Hot Salsa: Bilingual Poems on Being Young and Latino in the United States (Hardcover) 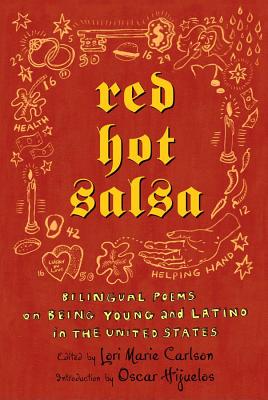 i think in spanish
i write in english

i want to go back to puerto rico,
but i wonder if my kink could live
in ponce, mayagüez and carolina

--from "My Graduation Speech," by Tato Laviera

Ten years after the publication of the acclaimed Cool Salsa, editor Lori Marie Carlson has brought together a stunning variety of Latino poets for a long-awaited follow-up. Established and familiar names are joined by many new young voices, and Pulitzer Prize-winning novelist Oscar Hijuelos has written the Introduction.

The poets collected here illuminate the difficulty of straddling cultures, languages, and identities. They celebrate food, family, love, and triumph. In English, Spanish, and poetic jumbles of both, they tell us who they are, where they are, and what their hopes are for the future.

Oscar Hijuelos was born of Cuban parentage in New York in 1951 and graduated from City College with a master's in creative writing, studying under the likes of Susan Sontag, Donald Barthelme, and William S. Burroughs. His first novel, Our House in the Last World, was published in 1985. In 1990 he became the first Hispanic writer to be awarded the Pulitzer Prize for Fiction. He is also the recipient of the Rome Prize in Literature from the American Academy in Rome, an Ingram Merrill Foundation Award, and the Hispanic Heritage Award for Literature, along with several grants from the Guggenheim Foundation and the National Endowment for the Arts. He wrote eight novels which, have been translated into more than twenty-five languages. He passed away in 2013.