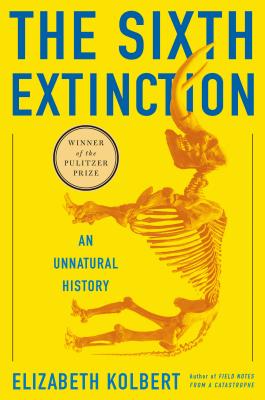 “This book is beautifully written and really interesting. I’m at the beginning of the book, so it’s mostly about the history behind the science and concepts of paleontology, extinction, etc. It’s incredibly fascinating. To paraphrase Jon Stewart and an interview he did with Kolbert, there just is no silver lining. We really are killing everything. I’m glad this book is doing so well, and a lot of people are aware of it and aware of what we’re doing to the planet.”

A major book about the future of the world, blending intellectual and natural history and field reporting into a powerful account of the mass extinction unfolding before our eyes

Over the last half a billion years, there have been five mass extinctions, when the diversity of life on earth suddenly and dramatically contracted. Scientists around the world are currently monitoring the sixth extinction, predicted to be the most devastating extinction event since the asteroid impact that wiped out the dinosaurs. This time around, the cataclysm is us.

In The Sixth Extinction, two-time winner of the National Magazine Award and New Yorker writer Elizabeth Kolbert draws on the work of scores of researchers in half a dozen disciplines, accompanying many of them into the field: geologists who study deep ocean cores, botanists who follow the tree line as it climbs up the Andes, marine biologists who dive off the Great Barrier Reef. She introduces us to a dozen species, some already gone, others facing extinction, including the Panamian golden frog, staghorn coral, the great auk, and the Sumatran rhino.

Through these stories, Kolbert provides a moving account of the disappearances occurring all around us and traces the evolution of extinction as concept, from its first articulation by Georges Cuvier in revolutionary Paris up through the present day. The sixth extinction is likely to be mankind's most lasting legacy; as Kolbert observes, it compels us to rethink the fundamental question of what it means to be human.

Elizabeth Kolbert is a staff writer at The New Yorker. She is the author of Field Notes from a Catastrophe: Man, Nature, and Climate Change. She lives in Williamstown, Massachusetts, with her husband and children.

[The Sixth Extinction] is a wonderful book, and it makes very clear that big, abrupt changes can happen; they're not outside the realm of possibility. They have happened before, they can happen again. —President Barack Obama

“[An] excellent new book...The Sixth Extinction is the kind of book that helps us recognize the actual planet we live upon.” —New York Review of Books

“Thorough and fascinating . . . Kolbert is an economical and deft explainer of the technical, and about as intrepid a reporter as they come . . . Her reporting is meticulous.” —Harper's

“Riveting... It is not possible to overstate the importance of Kolbert's book. Her prose is lucid, accessible and even entertaining as she reveals the dark theater playing out on our globe.” —San Francisco Chronicle

“Your view of the world will be fundamentally changed... Kolbert is an astute observer, excellent explainer and superb synthesizer, and even manages to find humor in her subject matter.” —The Seattle Times

“What's exceptional about Kolbert's writing is the combination of scientific rigor and wry humor that keeps you turning the pages.” —National Geographic

“[Kolbert] makes a page-turner out of even the most sober and scientifically demanding aspects of extinction. Combining a lucid, steady, understated style with some enviable reporting adventures... she produces a book that is both serious-minded and invites exclamation points into its margins.” —New York Magazine

“Powerful . . . Kolbert expertly traces the ‘twisting' intellectual history of how we've come to understand the concept of extinction, and more recently, how we've come to recognize our role in it. . . An invaluable contribution to our understanding of present circumstances.” —Al Gore, The New York Times Book Review

“Arresting . . . Ms. Kolbert shows in these pages that she can write with elegiac poetry about the vanishing creatures of this planet, but the real power of her book resides in the hard science and historical context she delivers here, documenting the mounting losses that human beings are leaving in their wake.” —The New York Times

“[Kolbert] grounds her stories in rigorous science and memorable characters past and present, building a case that a mass extinction is underway, whether we want to admit it or not.” —Discover Magazine

“Throughout her extensive and passionately collected research, Kolbert offers a highly readable, enlightening report on the global and historical impact of humans... a highly significant eye-opener rich in facts and enjoyment.” —Kirkus (starred review)

“The factoids Kolbert tosses off about nature's incredible variety--a frog that carries eggs in its stomach and gives birth through its mouth, a wood stork that cools off by defecating on its own legs--makes it heartbreakingly clear, without any heavy-handed sermonizing from the author, just how much we lose when an animal goes extinct. In the same way, her intrepid reporting from far-off places--Panama, Iceland, Italy, Scotland, Peru, the Amazonian rain forest of Brazil, and the remote one tree Island, off the coast of Australia--gives us a sense of the earth's vastness and beauty.” —Bookforum

“Kolbert accomplishes an amazing feat in her latest book, which superbly blends the depressing facts associated with rampant species extinctions and impending ecosystem collapse with stellar writing to produce a text that is accessible, witty, scientifically accurate, and impossible to put down.” —Publishers Weekly (starred review)

“An epic, riveting story of our species that reads like a scientific thriller--only more terrifying because it is real. Like Rachel Carson's Silent Spring, Elizabeth Kolbert's The Sixth Extinction is destined to become one of the most important and defining books of our time.” —David Grann, author of The Lost City of Z

“I tore through Elizabeth Kolbert's The Sixth Extinction with a mix of awe and terror. Her long view of extinction excited my joy in life's diversity -- even as she made me aware how many species are currently at risk.” —Dava Sobel, author of Longitude and Galileo's Daughter

“With her usual lucid and lovely prose, Elizabeth Kolbert lays out the sad and gripping facts of our moment on earth: that we've become a geological force, driving vast swaths of creation over the brink. A remarkable addition to the literature of our haunted epoch.” —Bill McKibben, author Oil and Honey: The Education of an Unlikely Activist

“Elizabeth Kolbert's cautionary tale, The Sixth Extinction, offers us a cogent overview of a harrowing biological challenge. The reporting is exceptional, the contextualizing exemplary. Kolbert stands at the forefront of what it means to be a socially responsible American writer today.” —Barry Lopez, author of Arctic Dreams

“The sixth mass extinction is the biggest story on Earth, period, and Elizabeth Kolbert tells it with imagination, rigor, deep reporting, and a capacious curiosity about all the wondrous creatures and ecosystems that exist, or have existed, on our planet. The result is an important book full of love and loss.” —David Quammen, author of The Song of the Dodo and Spillover

“Elizabeth Kolbert writes with an aching beauty of the impact of our species on all the other forms of life known in this cold universe. The perspective is at once awe-inspiring, humbling and deeply necessary.” —T.C. Boyle, author of San Miguel