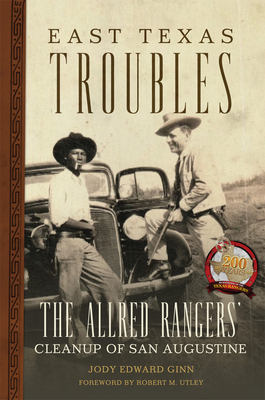 When the gun smoke cleared, four men were found dead at the hardware store in a rural East Texas town. But this December 1934 shootout was no anomaly. San Augustine County had seen at least three others in the previous three years, and these murders in broad daylight were only the latest development in the decade-long rule of the criminal McClanahan-Burleson gang. Armed with handguns, Jim Crow regulations, and corrupt special Ranger commissions from infamous governors "Ma" and "Pa" Ferguson, the gang racketeered and bootlegged its way into power in San Augustine County, where it took up robbing and extorting local black sharecroppers as its main activity. After the hardware store shootings, white community leaders, formerly silenced by fear of the gang's retribution, finally sought state intervention. In 1935, fresh-faced, newly elected governor James V. Allred made good on his promise to reform state law enforcement agencies by sending a team of qualified Texas Rangers to San Augustine County to investigate reports of organized crime. In East Texas Troubles, historian Jody Edward Ginn tells of their year-and-a-half-long cleanup of the county, the inaugural effort in Governor Allred's transformation of the Texas Rangers into a professional law enforcement agency. Besides foreshadowing the wholesale reform of state law enforcement, the Allred Rangers' investigative work in San Augustine marked a rare close collaboration between white law enforcement officers and black residents. Drawing on firsthand accounts and the sworn testimony of black and white residents in the resulting trials, Ginn examines the consequences of such cooperation in a region historically entrenched in racial segregation. In this story of a rural Texas community's resurrection, Ginn reveals a multifaceted history of the reform of the Texas Rangers and of an unexpected alliance between the legendary frontier lawmen and black residents of the Jim Crow South.