A Texan's Story: The Autobiography of Walter Prescott Webb (Hardcover) 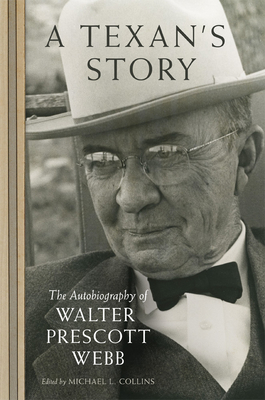 Walter Prescott Webb (1888-1963), a towering figure in Texas and western history and letters, published an abundance of books--but for decades the autobiography he'd written late in life sat largely undisturbed among his papers. Webb's remarkable story appears here in print for the first time, edited and annotated by Michael Collins, an authority on Texas history. This firsthand account offers readers a window on the life, the work, and the world of one of the most interesting thinkers in the history, and historiography, of Texas. Webb's narrative carries us from the drought-scarred rim of West Texas known as the Cross Timbers, to the hardscrabble farm life that formed him, to the bright lights of Austin and the University of Texas, where he truly came of age. Fascinating for the picture it summons of the Texas of his youth and the intellectual landscape of his career, Webb's autobiography also offers intriguing insights into the way his epic work, The Great Plains, evolved. He also describes the struggle behind his groundbreaking history of that storied frontier fighting force the Texas Rangers. Along the way, Webb reflects on the nature of historical research, the role that Texas and the West have played in American history, the importance of education, and the place of universities in our national culture. More than a rare encounter with a true American character's life and thought, A Texan's Story is also a uniquely enlightening look into the understanding, writing, and teaching of western American history in its formative years.