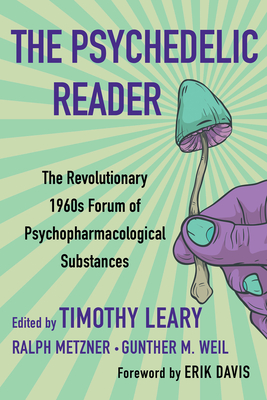 More than 50 years after Timothy Leary encouraged an entire generation to "turn on, tune in, drop out," there's been a resurgence of scientific research and popular interest in the use of psychedelic drugs for everything from therapeutic treatments to productivity boosts. The Psychedelic Reader collects the writings of luminaries from the dawn of the psychedelic era. With words from Alan Watts, Timothy Leary, Sir Julian Huxley, Ralph Metzner, and more, this powerful anthology presents the entire psychedelic spectrum with both the seriousness and open-mindedness it requires.

Once an alternative doorway into radical culture, LSD is now being re-examined for its possible mental health benefits. Take a visionary trip back to where it all began in The Psychedelic Reader...

Half a century ago, the world changed forever when a Swiss chemist inadvertently ingested the experimental compound lysergic acid diethylamide. Many scientists expected LSD's radically psychoactive chemicals to revolutionize mainstream culture. The Psychedelic Review was founded in 1963 as a serious journal dedicated to the study of the potential of both natural and synthesized psychedelic substances. Presenting experts in the fields of anthropology, religion, pharmacology, poetry, and metaphysics, this pioneering journal had a dramatic impact on its times.

Today, the benefits of LSD and other psychoactive drugs in treating depression, anxiety disorders, and PTSD have sparked renewed research. The Psychedelic Reader offers a relevant guidebook to the foundations of a bold new era in mental health studies. Luminaries such as Alan Watts, Timothy Leary, Sir Julian Huxley, and Ralph Metzner contribute insights on a variety of fascinating and controversial subjects. From precise dosage guidelines to ruminations on the poetry of Herman Hesse, this powerful anthology presents the entire psychedelic spectrum with both the seriousness and open-mindedness it deserves.

Timothy Leary was one of the most famous countercultural icons of the 1960s. In 1957, the Harvard psychologist experienced a "profound transcendent experience" while taking hallucinogens in Mexico. No longer content with his work in personality assessment, Leary began advocating the psychotherapeutic and spiritual benefits of LSD. His experiments with LSD often involved students and wild "tripping" parties, which eventually led to his dismissal from Harvard. With patronage from heirs of the Mellon fortune, Leary continued his experiments and prolific writing career at a rambling estate in upstate New York known as Millbrook. In 1967, Leary spoke at a San Francisco "Be-In," where he coined the phrase "Turn on, tune in, and drop out." Labeled "The Most Dangerous Man in America," Leary had many run-ins with the law and served several prison sentences. He died of prostate cancer in 1996; the following year seven grams of his ashes were launched into space aboard a Pegasus rocket.

Ralph Metzner, Ph.D., was a psychologist who explored states of consciousness and transformational practices throughout his career. As a graduate student at Harvard (where he received a Ph.D. in clinical psychology), he worked with Timothy Leary and Richard Alpert (later Ram Dass) on the Harvard Psilocybin Projects. He co-wrote The Psychedelic Experience and was editor of The Psychedelic Review. He was a professor of psychology at the California Institute of Integral Studies. He was also president of the Green Earth Foundation, a non-profit organization dedicated to reconnecting humans and the environment. The author of over a dozen books, Dr. Metzner maintained a part-time psychotherapy practice and conducted numerous workshops on consciousness transformation, both nationally and internationally.

Gunther M. Weil, Ph.D., is an educator, psychologist and consultant who has provided personal growth training for executives and their organizations throughout the world. He is also a 30-year practitioner and teacher of Tai Chi Chuan and an internationally recognized master teacher of Qigong. Weil served as a Fullbright Scholar in Europe and received his doctorate from Harvard University in 1965. His early professional mentors included Carl Rogers, the creator of Client Centered Psychotherapy, and Abraham Maslow, the father of Humanistic Psychology. He was invited by Maslow to teach at Brandeis University and he also received faculty and administrative appointments at Boston College and the University of Massachusetts.