Plain Secrets: An Outsider Among the Amish (Paperback) 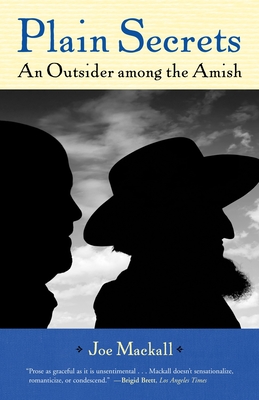 Joe Mackall has lived surrounded by the Swartzentruber Amish community of Ashland County, Ohio, for over sixteen years. They are the most traditional and insular of all the Amish sects: the Swartzentrubers live without gas, electricity, or indoor plumbing; without lights on their buggies or cushioned chairs in their homes; and without rumspringa, the recently popularized "running-around time" that some Amish sects allow their sixteen-year-olds.

Over the years, Mackall has developed a steady relationship with the Shetler family (Samuel and Mary, their nine children, and their extended family). Plain Secrets tells the Shetlers' story over these years, using their lives to paint a portrait of Swartzentruber Amish life and mores. During this time, Samuel's nephew Jonas finally rejects the strictures of the Amish way of life for good, after two failed attempts to leave, and his bright young daughter reaches the end of school for Amish children: the eighth grade. But Plain Secrets is also the story of the unusual friendship between Samuel and Joe. Samuel is quietly bemused—and, one suspects, secretly delighted—at Joe's ignorance of crops and planting, carpentry and cattle. He knows Joe is planning to write a book about the family, and yet he allows him a glimpse of the tensions inside this intensely private community.

These and other stories from the life of the family reveal the larger questions posed by the Amish way of life. If the continued existence of the Amish in the midst of modern society asks us to consider the appeal of traditional, highly restrictive, and gendered religious communities, it also asks how we romanticize or condemn these communities—and why. Mackall's attempt to parse these questions—to write as honestly as possible about what he has seen of Amish life—tests his relationship with Samuel and reveals the limits of a friendship between "English" and Amish.

Joe Mackall is author of The Last Street Before Cleveland and Plain Secrets: An Outsider Among the Amish. A professor of English and journalism at Ashland University, he is coeditor of the journal River Teeth and has written for NPR's Morning Edition, the Washington Post, and the Cleveland Plain Dealer, among other publications. He lives near Cleveland, Ohio.

"Mackall does the job beautifully, painting an intimate portrait of the family that leaves the reader feeling humbled by the common thread that's woven into all of us." —Sarah English, Cleveland Magazine

"Wonderful and enlightening . . . a loving portrait, warts and all, of an often misunderstood people."—Booklist, starred review

"An engaging personal memoir . . . neither an exposé nor an outsider's fanciful romanticization of the Amish. By focusing on the loves and losses of one large Amish clan, Mackall breathes life into a complex group often idealized or caricatured."—Publishers Weekly

"In simple but elegant prose that matches the values of his subject, Joe Mackall takes us deep into the Amish community. He neither romanticizes nor condemns an alternate way of living, but provides stunning insight through the generosity and compassion of his own heart."—Chris Offutt, author of The Same River Twice and Kentucky Straight

"Joe Mackall's Plain Secrets: An Outsider Among the Amish meets the biggest challenge of a book such as this by living up to his subtitle: Mackall is both outside and among in equal measure, and it's the most difficult terrain to occupy. Plain Secrets vibrates in that in-betweenness, in ways that only songs or poems usually can, and it does so in prose that's as clear as water. It’s built the way the Amish build their barns—everything here is plumb and level." —Diana Hume George, author of The Lonely Other: A Woman Watching America

"Plain Secrets is a moving exploration of a little-known world and friendship across a cultural divide."—Boston GlobeOff the Shelf column

"Mackall explores this paradox with rare honesty and insight . . . Another strength of the book is that while maintaining a personal narrative voice, Mackall folds in a succinct and engaging history of the Anabaptist religious tradition and the polity of the Amish church. This added context greatly enhances the more personal stories."—Boston Globe

"Mackall's writing is an honest and refreshing change from the customary saccharin scribbling about the Noble Amish Man. Despite, or perhaps because of, Mackall's refusal to perch the Amish on a pedestal, he manages to convey a deep respect for the people."—Lancaster New Era

"Mackall describes the details of family, farming and church life with sympathy, accuracy and good will… His particularistic description of one family is a welcome addition to what had often been a sociological literature." —Christian Century

". . . he writes with a forthright precision."—Akron Beacon Journal

"The book points to a difficult truth: A religious community is bound to be freed. Mackall explores this paradox with rare honesty and insight . . . [and] achieves what he promises."—Tom Montgomery-Fate, Boston Globe