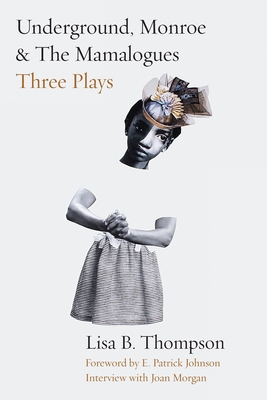 This book features new plays by Lisa B. Thompson, author of Single Black Female. In these three plays, the black feminist playwright and scholar thoughtfully explores themes such as the black family, motherhood, migration, racial violence, and trauma and its effect on black people from the early twentieth century to the present. The works showcase Thompson’s subversive humor and engagement with black history and culture through the lens of the black middle class.

The thriller Underground explores the challenges of radical black politics among the black middle class in the post-Obama era. Monroe, a period drama about the Great Migration, depicts the impact of a lynching on a family and community in 1940s Louisiana. The Mamalogues, a satirical comedy, focuses on three middle-class black single mothers as they lean in, stress out, and guide precocious black children from diapers to college in a dangerous world. This collection will be compelling to readers interested in African American studies; drama, theater, and performance; feminist and gender studies; popular culture and media studies; and American studies.

LISA B. THOMPSON is an award-winning playwright whose work has been produced across the United States and internationally. Her work has been produced by Crossroads Theatre Company, New Professional Theatre, Brava Theater Center, Theatre Rhinoceros, The Vortex, New African Grove Theatre Company, Black Spectrum Theatre, Austin Playhouse, the Out of Ink Festival, and the National Black Theatre Festival. Thompson is also a professor of African and African diaspora studies at the University of Texas at Austin and the author of Beyond the Black Lady: Sexuality and the New African American Middle Class.

JOAN MORGAN is a writer, a scholar, a cultural critic, and a feminist.

“Underground is more than a play. It's a powerful weapon of change—a truth bomb that will get conversations started.” —T. Lynn Mikeska, Austin Chronicle


“Monroe is a wonderful new play that contains charming characters, witty dialogue and an examination of the horrific effects of racial terrorism in a way that entertains while it educates.” —Frank Benge, Broadway World


“The Mamalogues . . . treats [motherhood] in a way that everyone can recognize . . . Sisters in the BBSM—Black Bougie Single Mothers—are here to share, and in this case, that can be fun. But alongside ‘bougie’ and ‘mothers’ in the support group's name are the words ‘single’ and ‘black,’ and they carry a weight that must be acknowledged. Thompson does so in dramatic moments that live side by side with the comic ones, just as it happens in life.” —Robert Faires, The Austin Chronicle

“The lushness of Lisa B. Thompson’s singular theatrical imagination is on full display in this dazzling trio of plays. Writing with remarkable urgency, creativity, humor, and humanity, Thompson crafts complex characters and worlds that affirm and invite us to delight in the beauty of black life.” —Isaiah Matthew Wooden, coeditor of Tarell Alvin McCraney: Theater, Performance, and Collaboration

“We expect our storytellers to bring truth to the madness, and the stage has been where so much of that madness has been scripted in life-sized proportions. Lisa B. Thompson understands this better than most, and with her new collection, Underground, Monroe, and The Mamalogues, she captures the magic, trauma, and most importantly, the humor and laughter of Black life, and offers us a lifeline to the could-have-beens and should-have-beens that we can take for our own.” —Mark Anthony Neal, author of Looking for Leroy: Illegible Black Masculinities

“Captivating, funny, and smart, Lisa B. Thompson’s Underground, Monroe, and The Mamalogues: Three Plays portrays the vitality and complexity of blackness. Drawing from rich histories that pull audiences into specific places and times, the collection enriches our understanding of the black middle class through multifaceted, complicated, and always compelling narratives.” —Soyica Colbert, author of Black Movements: Performance and Cultural Politics

“Scored with laughs joyously and tenderly musical, Thompson’s plays capture symphonies of humor and pathos shared between friends and family. Colloquialisms, vernacular riffs, and style trends condition characters that plumb and challenge notions of race and gender as well as conflicts of language and culture. Thompson marvelously works rhythms and breaks of sincerity, irony, love, and social critique to engage the epic experiences of being Black in America. These plays, like her celebrated Single Black Female, make for deceptively light stage work around intense histories and trenchant reflections.” —Stephanie Leigh Batiste, playwright, actor, and author of Darkening Mirrors: Imperial Representation in Depression-Era African American Performance