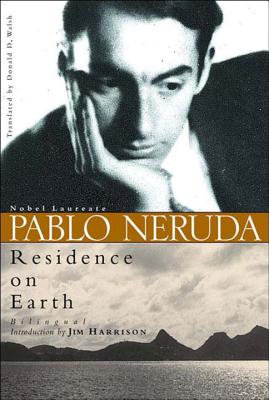 In celebration of the 100th anniversary of Pablo Neruda's birth, New Directions is pleased to announce the reissue of a classic work in a timeless translation by Donald D. Walsh and fully bilingual. Residence on Earth is perhaps Neruda's greatest work. Upon its publication in 1973, this bilingual publication instantly became "a revolution... a classic by which masterpieces are judged" (Review). "In Residence on Earth," wrote Amado Alonso, "the tornado of fury will no longer pass without lingering, because it will be identified with [Neruda's] heart."

Pablo Neruda was born in 1904 in the town of Parral in Chile. He received numerous prestigious awards for his work, including the International Peace Prize in 1950, the Lenin Peace Prize and the Stalin Peace Prize in 1953. In 1971, he won the Nobel Prize for Literature. Two years later he died of leukemia in Santiago, Chile.

One of the greatest major poets of the twentieth century.
— The New York Times Book Review

It is hard not to be swept away by the urgency of his language, and that’s especially so when he seems swept away.
— The New Yorker

The greatest poet of the twentieth century—in any language.
— Gabriel Garcia Márquez