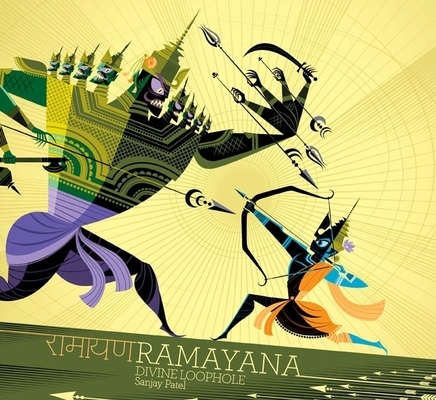 By Sanjay Patel
$29.95
Backordered. Place an order and we will let you know when to expect your book.

• Illustrated tale features over 100 colorful full-spread illustrations, a detailed pictorial glossary of the cast of characters who make up the epic tale, and sketches of the work in progress
• An ancient mythology with timeless, essential and meaningful themes
• Sanjay Patel is the author of The Little Book of Hindu Deities while an animator and storyboard artist for Pixar Animation Studios, he worked on numerous films, including Monsters, Inc. ; A Bug's Life; Toy Story 2; Ratatouille; The Incredibles; and Toy Story 3. His short film Sanjay's Super Team was nominated for an Academy Award for Best Animated Short Film

Fans of Sanjay Patel's The Little Book of Hindu Deities: From the Goddess of Wealth to the Sacred Cow and Ganesha's Sweet Tooth will be entranced by the images and story in Ramayana: Divine Loophole.

From princesses in peril to gripping battles, scheming royals, and hordes of bloodthirsty demons, Ramayana: Divine Loophole is the ultimate adventure story presented with an unforgettably modern touch.

Sanjay Patel is the author of The Little Book of Hindu Deities and is an animator and storyboard artist for Pixar Animation Studios, where he has worked on numerous films, including Monsters, Inc.; A Bug's Life; Toy Story 2; Ratatouille; The Incredibles; and Toy Story 3. He has also worked on The Simpsons for Fox and with legendary cartoonist John K., creator of Ren and Stimpy.