Black Gods of the Metropolis: Negro Religious Cults of the Urban North (Paperback) 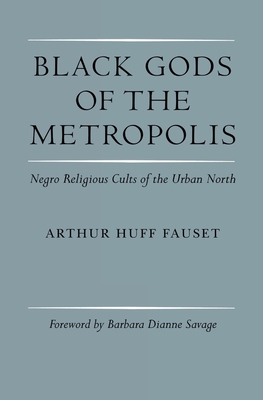 By Arthur Huff Fauset, Barbara Dianne Savage (Foreword by), John Szwed (Introduction by)
$26.50
Out of Stock; Usually Arrives in 5-7 Days

Stemming from his anthropological field work among black religious groups in Philadelphia in the early 1940s, Arthur Huff Fauset believed it was possible to determine the likely direction that mainstream black religious leadership would take in the future, a direction that later indeed manifested itself in the civil rights movement. The American black church, according to Fauset and other contemporary researchers, provided the one place where blacks could experiment without hindrance in activities such as business, politics, social reform, and social expression. With detailed primary accounts of these early spiritual movements and their beliefs and practices, Black Gods of the Metropolis reveals the fascinating origins of such significant modern African American religious groups as the Nation of Islam as well as the role of lesser known and even forgotten churches in the history of the black community.

Arthur Huff Fauset (1899-1983) was a civil rights activist, educator, folklorist, and author of several works, including Sojourner Truth, a biography. Barbara Dianne Savage is Associate Professor of History at the University of Pennsylvania. She is author of Broadcasting Freedom: Radio, War, and the Politics of Race, 1938-1948.