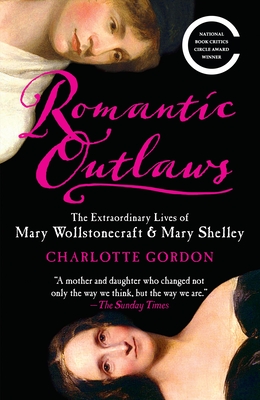 This groundbreaking dual biography brings to life a pioneering English feminist and the daughter she never knew. Mary Wollstonecraft and Mary Shelley have each been the subject of numerous biographies, yet no one has ever examined their lives in one book—until now. In Romantic Outlaws, Charlotte Gordon reunites the trailblazing author who wrote A Vindication of the Rights of Woman and the Romantic visionary who gave the world Frankenstein—two courageous women who should have shared their lives, but instead shared a powerful literary and feminist legacy.

In 1797, less than two weeks after giving birth to her second daughter, Mary Wollstonecraft died, and a remarkable life spent pushing against the boundaries of society’s expectations for women came to an end. But another was just beginning. Wollstonecraft’s daughter Mary was to follow a similarly audacious path. Both women had passionate relationships with several men, bore children out of wedlock, and chose to live in exile outside their native country. Each in her own time fought against the injustices women faced and wrote books that changed literary history.

The private lives of both Marys were nothing less than the stuff of great Romantic drama, providing fabulous material for Charlotte Gordon, an accomplished historian and a gifted storyteller. Taking readers on a vivid journey across revolutionary France and Victorian England, she seamlessly interweaves the lives of her two protagonists in alternating chapters, creating a book that reads like a richly textured historical novel. Gordon also paints unforgettable portraits of the men in their lives, including the mercurial genius Percy Shelley, the unbridled libertine Lord Byron, and the brilliant radical William Godwin.

“Brave, passionate, and visionary, they broke almost every rule there was to break,” Gordon writes of Wollstonecraft and Shelley. A truly revelatory biography, Romantic Outlaws reveals the defiant, creative lives of this daring mother-daughter pair who refused to be confined by the rigid conventions of their era.

“[An] impassioned dual biography . . . Gordon, alternating between the two chapter by chapter, binds their lives into a fascinating whole. She shows, in vivid detail, how mother influenced daughter, and how the daughter’s struggles mirrored the mother’s.”—The Boston Globe

Charlotte Gordon is the author of Mistress Bradstreet: The Untold Life of America’s First Poet and The Woman Who Named God: Abraham’s Dilemma and the Birth of Three Faiths. She has also published two books of poetry, When the Grateful Dead Came to St. Louis and Two Girls on a Raft. She is an associate professor of English at Endicott College and lives in Gloucester, Massachusetts.

“[An] impassioned dual biography . . . [Charlotte] Gordon brings a rousing zeal to her pages. Both Wollstonecraft and Shelley have been the subject of previous biographies—the author builds her account on a tremendous variety of sources and scholarship—but Gordon, alternating between the two chapter by chapter, binds their lives into a fascinating whole. She shows, in vivid detail, how mother influenced daughter, and how the daughter’s struggles mirrored the mother’s.”—The Boston Globe

“Written with the galloping pace of a skilled novel peopled with fascinating characters . . . these women live on in its pages. . . . Thorough and irresistible.”—The Seattle Times

“Gordon unfolds the two stories in tandem, deftly balancing the gossipy aspects of her subjects’ lives with their serious intellectual concerns.”—The New Yorker

“Thoughtful, intelligent and deeply felt . . . Gordon has written a book about two women, a mother and her daughter, who changed not only the way we think, but the way we are. . . . Skillfully entwining the story of two generations that spanned a century, Gordon’s Romantic Outlaws enables readers to compare the different ways in which these two remarkable women confronted their tragically difficult destinies.”—The Sunday Times (U.K.)

“[Romantic Outlaws] is an innovative dual biography that foregrounds the writing of two women who disregarded the moral codes of their eras and shaped their own destinies. Gordon’s parallel mapping of their lives reveals fascinating similarities in the ways writing sustained, and sometimes saved, them both.”—Financial Times

“A most welcome deeper take on the women who scandalized Victorian England—and whose stories continue to resonate today.”—Vogue

“By linking these two lives, Ms. Gordon’s biography stretches over a fascinating era in history, characterized by great flux in political and cultural thinking and involving some of the main figures in English literary and philosophical history.”—The Wall Street Journal

“The relationship between Mary Shelley and the mother she never knew . . . is explored with remarkable insight and perspicacity in this exhilarating dual biography. . . . Gordon’s perceptive reading of both women’s published works illuminates their core ideas [and] identifies the emotional fault lines caused by the drama in their lives. Her lucid prose and multifaceted appraisal of Wollstonecraft, Shelley, and their times make warm-blooded and fully fleshed-out people of writers who exist for readers today only as the literary works they left behind.”—Publishers Weekly (starred review)

“Gordon infuses literary history with electrifying discoveries in this symbiotic portrait of radical mother-daughter writers who indelibly changed society and the arts. . . . The first to fully investigate the life-determining influence Wollstonecraft’s feminist writings had on Mary Shelley, Gordon chronicles their harsh, tragic, and courageous lives in alternating chapters that are as emotionally incisive as they are finely particularized in their astute renderings of tumultuous settings and dire predicaments.”—Booklist (starred review)