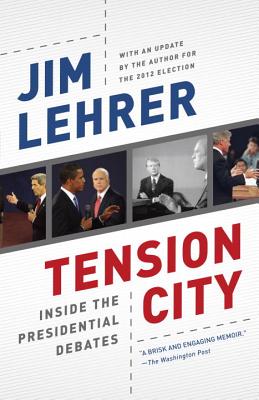 With an update by the author for the 2012 election

A veteran newsman who has presided over eleven presidential and vice-presidential debates, Jim Lehrer gives readers a ringside seat for some of the epic political battles of our time, shedding light on all of the critical turning points and rhetorical faux pas that helped determine the outcome of America’s presidential elections. Drawing on his own experiences as “the man in the middle seat,” in-depth interviews with the candidates and his fellow moderators, and transcripts of key exchanges, Lehrer illuminates what he calls the “Major Moments” and “killer questions” that defined the debates, from Kennedy-Nixon to Obama-McCain. In this paperback edition, he also offers his expert analysis of the 2012 Republican primary debates.

Asked to sum up his experience as a participant in high-level televised debates, President George H. W. Bush memorably likened them to an evening in “tension city.” In Jim Lehrer’s absorbing account, we find out that truer words were never spoken.

“A really good read . . . [There is] no debating quality of Jim Lehrer’s book.”—Associated Press

“Jim Lehrer is a national monument, and this riveting book shows how he became America’s moderator.”—Michael Beschloss, author of Presidential Courage

Jim Lehrer is the author of twenty novels, two memoirs, and three plays, and for years was the executive editor and anchor of The NewsHour on PBS. He lives in Washington, D.C., with his novelist wife, Kate. They have three daughters.

“Unique and compelling . . . Jim Lehrer at once enlightens and entertains, deepening our understanding of the modern presidency while telling a splendid story. Tension City is engaging history from a fair-minded and insightful author who has himself become part of the nation’s fabric.”—Jon Meacham, Pulitzer Prize–winning author of American Lion

“Recreated with a wit and perspective that only a natural born storyteller can summon . . . Some of the most interesting presidential debates take place off-camera, around the reporters asking the questions . . . remember Bernie Shaw’s jaw-dropping inquiry directed to Michael Dukakis about the hypothetical rape and murder of the candidate’s wife? That’s just one of the revelations that makes this the ultimate insider’s account of what George H. W. Bush dubbed ‘tension city.’ It’s all here—Gerald Ford’s premature liberation of Poland; Ronald Reagan’s way with one-liners; the well-honed empathy of Bill Clinton; and the multiple personalities of Al Gore.”—Richard Norton Smith, author of The Colonel

“Jim Lehrer is a national monument, and this riveting book shows how he became America’s moderator. Tension City is at once Lehrer’s behind-the-blue-curtain account of his central role in almost a dozen presidential debates and an original, brisk inner history of recent American politics, combined with important lessons on how to moderate anything—all told in Lehrer’s famously wry and authoritative voice. Each page of Lehrer’s book benefits from his unparalleled experience as a key player, and his extraordinary ability to view these fabled confrontations with the detachment, insight, humor, and ironic sense of a wonderful writer.”—Michael Beschloss, New York Times bestselling author of Presidential Courage