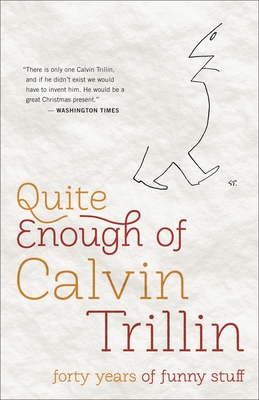 Calvin Trillin has committed blatant acts of funniness all over the place—in The New Yorker, in one-man off-Broadway shows, in his “deadline poetry” for The Nation, in comic novels, and in what USA Today called “simply the funniest regular column in journalism.” Now Trillin selects the best of his funny stuff and organizes it into topics like high finance (“My long-term investment strategy has been criticized as being entirely too dependent on Publishers Clearing House sweepstakes”) and the literary life (“The average shelf life of a book is somewhere between milk and yogurt”). He addresses the horrors of witnessing a voodoo economics ceremony and the mystery of how his mother managed for thirty years to feed her family nothing but leftovers (“We have a team of anthropologists in there now looking for the original meal”). He even skewers deserving political figures in poetry. In this, the definitive collection of his humor, Calvin Trillin is prescient, insightful, and invariably hilarious.

“A literary treasure . . . There is only one Calvin Trillin, and if he didn’t exist we would have to invent him.”—The Washington Times

“Funny is to Trillin what drinking is to Uncle Jed in Annie Get Your Gun—it’s what he does ‘natur’lly.’ He’s also a lot more than funny. Quite Enough of Calvin Trillin is the twenty-eighth book he’s published over not far short of a half-century, and their range of subjects is remarkable.”—Jonathan Yardley, The Washington Post

“Trillin made his reputation over four decades as the author of ‘U.S. Journal’ in the New Yorker [but he] is incapable of resisting the temptation of comedy. The jokes kept on welling up and Mr. Trillin made a parallel reputation as a writer of funny stuff.”—The Economist

A longtime staff writer at The New Yorker, Calvin Trillin is also The Nation’s deadline poet. His bestsellers range from the memoir About Alice to Obliviously On He Sails: The Bush Administration in Rhyme. He lives in Greenwich Village, which he describes as “a neighborhood where people from the suburbs come on weekends to test their car alarms.”

“I spent my college years deep into the great humorists: Benchley, Perelman, Woody Allen. Calvin Trillin is up there with any of them.”—David Brooks, The Daily Beast

“Trillin may be the funniest columnist in America—bemused, amused, wry and right on the mark.”—People