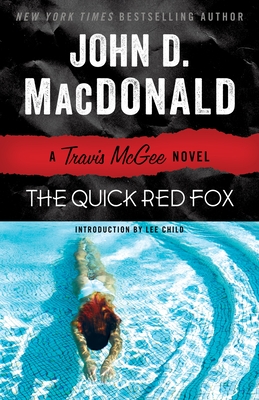 This is book number 4 in the Travis McGee series.

From a beloved master of crime fiction, The Quick Red Fox is one of many classic novels featuring Travis McGee, the hard-boiled detective who lives on a houseboat.

She’s the opposite of a damsel in distress: a famous movie star, very beautiful, very much in control of her life. She’s just made one little mistake and now she needs Travis McGee to set it right. The money is good and Travis’s funds are in need of replenishing. But that’s not the only reason he takes the case. There is the movie star’s assistant—efficient and reserved, with a sadness underneath that makes McGee feel he’d brave any danger to help her.

“John D. MacDonald is a shining example for all us in the field. Talk about the best.”—Mary Higgins Clark

Sultry movie star Lysa Dean has gotten herself into a spot of blackmail, posing for naked photos while participating in a debauched party near Big Sur. If the pictures get out, Lysa’s engagement to her rich, strait laced fiancé doesn’t stand a chance. Enter Travis McGee, who’s agreed to put a stop to the extortion, working alongside Lysa’s assistant, Dana Holtzer.

They begin by tracking down everyone associated with the lurid evening, and soon enough they’re led on a chase across the nation as murder after murder piles up. Further complicating matters, Travis and Dana’s relationship soon turns steamy. And just when he thinks he knows exactly where things are headed, one big twist shakes McGee’s life to the very foundation.