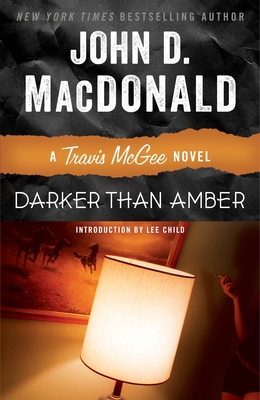 This is book number 7 in the Travis McGee series.

From a beloved master of crime fiction, Darker Than Amber is one of many classic novels featuring Travis McGee, the hard-boiled detective who lives on a houseboat.

A fishing trip is anything but relaxing when Travis McGee is involved. As McGee and his friend Meyer settle down to some midnight casting, a woman falls into the water from the bridge above them. Her name is Evangeline, and the hints she gives about the events leading to her near drowning suggest a less than pristine past. But McGee has saved her, and now he wants to see her make a new life—even if it means confronting a gang of murderers that makes his blood run cold.

“John D. MacDonald is a shining example for all of us in his field.”—Mary Higgins Clark

Evangeline may be the intended target in a complex scheme, but she’s no ordinary victim. Behind her darker than amber eyes is a woman who lures men onto her boat and robs them, throwing them overboard when she’s done with them. And now she’s enlisted the resistant Travis and Meyer to rescue her “savings” from her partners in crime.

When Evangeline winds up dead, McGee and Meyer must get involved. But the stakes are high—and Evangeline may not be the only casualty of her cruel game.