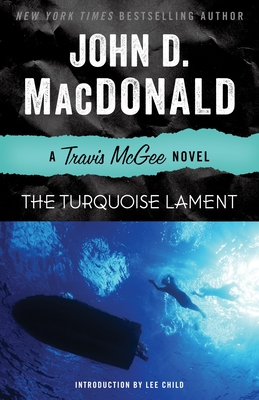 This is book number 15 in the Travis McGee series.

From a beloved master of crime fiction, The Turquoise Lament is one of many classic novels featuring Travis McGee, the hard-boiled detective who lives on a houseboat.

Funny thing about favors. Sometimes they come back to haunt you. And Travis McGee owes his friend a big one for saving his life once upon a time. Now the friend’s daughter, Linda “Pidge” Lewellen, needs help five time zones away in Hawaii before she sails off into the deep blue with a cold-blooded killer: her husband.

When treasure hunter Ted Lewellen saved his life in a bar fight, McGee could never have thought he’d end up paying his rescuer back in such a way. But years later he finds himself headed to Hawaii at Ted’s request to find out whether Pidge’s husband really is trying to kill her, or if she’s just losing her mind.

Of course, once McGee arrives he can’t help but give in to his baser instincts, and as his affair with Pidge gets underway, he can’t find a single thing wrong. McGee chalks up Pidge’s paranoia to simple anxiety, gives her a pep talk, and leaves for home blissfully happy. It’s not until he’s back in Lauderdale that he realizes he may have overlooked a clue or two. And Pidge might be in very serious danger.