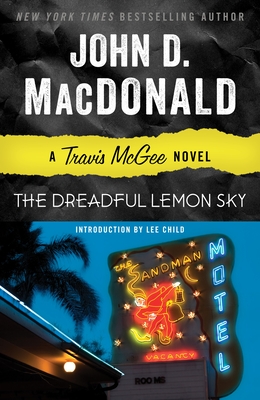 This is book number 16 in the Travis McGee series.

Never hide a hundred grand for an ex-girlfriend.

From a beloved master of crime fiction, The Dreadful Lemon Sky is one of many classic novels featuring Travis McGee, the hard-boiled detective who lives on a houseboat.

Around four in the morning, Travis McGee is jarred awake by a breathless ghost from his past: an old flame who needs a place to stash a package full of cash. What’s in it for McGee? Ten grand and no questions asked. Two weeks later, she’s dead.

Carolyn Milligan was only aboard McGee’s boat for one night. She came to drop off a hundred grand for safekeeping. What Carrie really needed was someone to keep her safe. She said she’d be back in a month. Instead Carrie is killed in a dubious roadside accident. Now McGee is left with a fortune—and a nagging conscience.

So McGee takes a trip to the seedy little town of Bayside, Florida, to look into Carrie’s life before she showed up on his boat. What McGee finds only pushes him further into the corrupt world of drugs and blood that Carrie was trying to escape. McGee is used to high stakes, but when the bodies start piling up, even he may be in over his head.