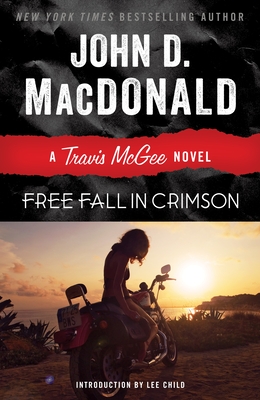 This is book number 19 in the Travis McGee series.

From a beloved master of crime fiction, Free Fall in Crimson is one of many classic novels featuring Travis McGee, the hard-boiled detective who lives on a houseboat.

He was rich, mean, and slowly succumbing to cancer—until someone hastened the inevitable by beating him to death at a Florida truck stop. Now Ellis Esterland’s son wants Travis McGee to find out who killed his estranged father. The why seems obvious: Esterland’s multimillion-dollar estate.

Though he had been reassured that he would receive a substantial inheritance, Ron Esterland was disowned by his wealthy father years ago. But upon dear old Dad’s conveniently timed murder, the family fortune winds up in the hands of Ellis’s ex-wife instead.

The quest to recover Ron’s money takes McGee from Hollywood to the Midwest, where he confronts prostitution rings and drug deals gone wrong. In the haze of violence surrounding him, McGee starts to lose sight of who he really is. But one thing remains crystal clear: McGee is on the trail of a killer conjured from his worst nightmares.