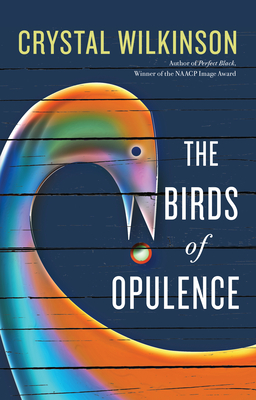 From the critically acclaimed, award-winning author of Blackberries, Blackberries and Water Street comes an astonishing new novel. A lyrical exploration of love and loss, The Birds of Opulence centers on several generations of women in a bucolic southern black township as they live with and sometimes surrender to madness.

The Goode-Brown family, led by matriarch and pillar of the community Minnie Mae, is plagued by old secrets and embarrassment over mental illness and illegitimacy. Meanwhile, single mother Francine Clark is haunted by her dead, lightning-struck husband and forced to fight against both the moral judgment of the community and her own rebellious daughter, Mona. The residents of Opulence struggle with vexing relationships to the land, to one another, and to their own sexuality. As the members of the youngest generation watch their mothers and grandmothers pass away, they live with the fear of going mad themselves and must fight to survive.

Crystal Wilkinson offers up Opulence and its people in lush, poetic detail. It is a world of magic, conjuring, signs, and spells, but also of harsh realities that only love -- and love that's handed down -- can conquer. At once tragic and hopeful, this captivating novel is a story about another time, rendered for our own.

Crystal Wilkinson is the author of Blackberries, Blackberries, winner of the Chaffin Award for Appalachian Literature, and Water Street, a finalist for both the UK's Orange Prize for Fiction and the Hurston/Wright Legacy Award. The winner of the 2008 Denny Plattner Award in Poetry from Appalachian Heritage magazine and the Sallie Bingham Award from the Kentucky Foundation for Women, she serves as Appalachian Writer-in-Residence at Berea College and teaches in the Spalding low residency MFA in Creative Writing Program.